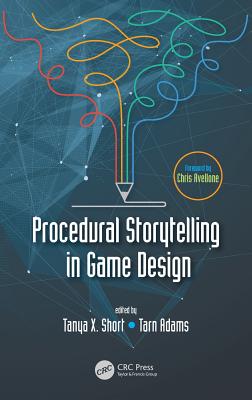 This edited collection of chapters concerns the evolving discipline of procedural storytelling in video games. Games are an interactive medium, and this interplay between author, player and machine provides new and exciting ways to create and tell stories. In each essay, practitioners of this artform demonstrate how traditional storytelling tools such as characterization, world-building, theme, momentum and atmosphere can be adapted to full effect, using specific examples from their games. The reader will learn to construct narrative systems, write procedural dialog, and generate compelling characters with unique personalities and backstories.

is the director of Kitfox Games, the 4-person studio behind Moon Hunters and Shattered Planet. Previously, she worked as a designer at Funcom Games on The Secret World and Age of Conan: Hyborian Adventures. In her spare time, she acts as the co-director of Pixelles, a non-profit helping more women make games.

Tarn Adams is best known as the developer of Dwarf Fortress since 2002 with his older brother Zach. He learned programming in his childhood, and has been designing computer games as a hobby. He quit his first year of a mathematics post doctorate at Texas A&M to focus on game development in 2006.