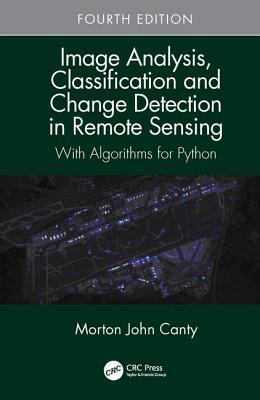 Image Analysis, Classification and Change Detection in Remote Sensing: With Algorithms for Python, Fourth Edition, is focused on the development and implementation of statistically motivated, data-driven techniques for digital image analysis of remotely sensed imagery and it features a tight interweaving of statistical and machine learning theory of algorithms with computer codes. It develops statistical methods for the analysis of optical/infrared and synthetic aperture radar (SAR) imagery, including wavelet transformations, kernel methods for nonlinear classification, as well as an introduction to deep learning in the context of feed forward neural networks.

New in the Fourth Edition:

Based on the success and the reputation of the previous editions and compared to other textbooks in the market, Professor Canty's fourth edition differs in the depth and sophistication of the material treated as well as in its consistent use of computer codes to illustrate the methods and algorithms discussed. It is self-contained and illustrated with many programming examples, all of which can be conveniently run in a web browser. Each chapter concludes with exercises complementing or extending the material in the text.

Morton John Canty is a senior research scientist in the Institute for Bio- and Geosciences at the Juelich Research Center in Germany, now semi-retired. He received his PhD in Nuclear Physics in 1969 at the University of Manitoba, Canada and, after post-doctoral positions in Bonn, Groningen and Marburg, began work in Juelich in 1979. There, his principal interests have been the development of statistical and gametheoretical models for the verification of international treaties and the use of remote sensing data for monitoring global treaty compliance. He has served on numerous advisory bodies to the German federal government and to the International Atomic Energy Agency in Vienna and was a coordinator within the European Network of Excellence on Global Monitoring for Security and Stability, funded by the European Commission. Morton Canty is the author of three monographs in the German language: on the subject of non-linear dynamics (Chaos und Systeme, Vieweg, 1995), neural networks for classification of remote sensing data (Fernerkundung mit neuronalen Netzen, Expert, 1999) and algorithmic game theory (Konfliktl]osungen mit Mathematica, Springer 2000). The latter text has appeared in a revised English version (Resolving Conflicts withMathematica, Academic Press, 2003). He is co-author of a monograph on mathematical methods for treaty verification (Compliance Quantified, Cambridge University Press, 1996). He has published many papers on the subjects of experimental nuclear physics, nuclear safeguards, applied game theory and remote sensing. He has lectured on nonlinear dynamical growth models and remote sensing digital image analysis to students at both the graduate and undergraduate level at Universities in Bonn, Berlin, Freiberg/Saxony and Rome.