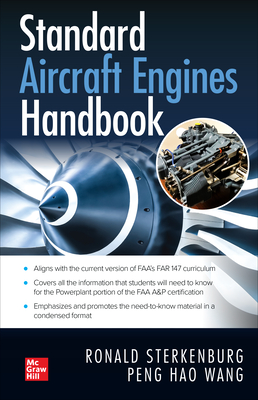 Learn the ins and outs of reciprocating and turbine aircraft engines

This hands-on guide succinctly covers all aspects of the two types of aircraft engines currently in use: reciprocating engines, used on small general aviation aircraft, and turbine engines, used on business jets and commercial aircraft. The book serves as a study guide for candidates preparing for the powerplant portion of the FAA Airframe and Powerplant certificate, and as an on-the-job reference for mechanics and aviation enthusiasts.

Written by experienced professors from the highly-ranked aviation program at Purdue University, Standard Aircraft Engines Handbook lays out technical details along with in-depth operational explanations. Relevant FAA regulations and requirements are highlighted throughout.