All of Statistics: A Concise Course in Statistical Inference 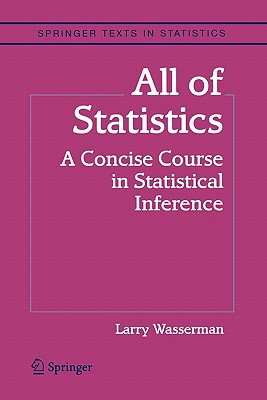 Taken literally, the title "All of Statistics" is an exaggeration. But in spirit, the title is apt, as the book does cover a much broader range of topics than a typical introductory book on mathematical statistics. This book is for people who want to learn probability and statistics quickly. It is suitable for graduate or advanced undergraduate students in computer science, mathematics, statistics, and related disciplines. The book includes modern topics like nonparametric curve estimation, bootstrapping, and clas- sification, topics that are usually relegated to follow-up courses. The reader is presumed to know calculus and a little linear algebra. No previous knowledge of probability and statistics is required. Statistics, data mining, and machine learning are all concerned with collecting and analyzing data. For some time, statistics research was con- ducted in statistics departments while data mining and machine learning re- search was conducted in computer science departments. Statisticians thought that computer scientists were reinventing the wheel. Computer scientists thought that statistical theory didn't apply to their problems. Things are changing. Statisticians now recognize that computer scientists are making novel contributions while computer scientists now recognize the generality of statistical theory and methodology. Clever data mining algo- rithms are more scalable than statisticians ever thought possible. Formal sta- tistical theory is more pervasive than computer scientists had realized.

Larry Wasserman is Professor of Statistics at Carnegie Mellon University. He is also a member of the Center for Automated Learning and Discovery in the School of Computer Science. His research areas include nonparametric inference, asymptotic theory, causality, and applications to astrophysics, bioinformatics, and genetics. He is the 1999 winner of the Committee of Presidents of Statistical Societies Presidents' Award and the 2002 winner of the Centre de recherches mathematiques de Montreal-Statistical Society of Canada Prize in Statistics. He is Associate Editor of The Journal of the American Statistical Association and The Annals of Statistics. He is a fellow of the American Statistical Association and of the Institute of Mathematical Statistics.