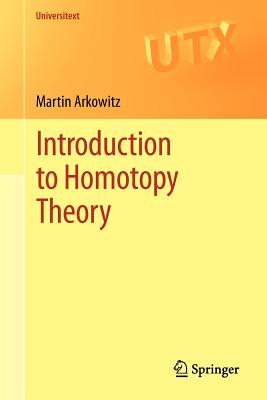 This is a book in pure mathematics dealing with homotopy theory, one of the main branches of algebraic topology. The principal topics are as follows:

- Basic Homotopy;
- H-spaces and co-H-spaces;
- Fibrations and Cofibrations;
- Exact sequences of homotopy sets, actions, and coactions;
- Homotopy pushouts and pullbacks;
- Classical theorems, including those of Serre, Hurewicz, Blakers-Massey, and Whitehead;
- Homotopy Sets;
- Homotopy and homology decompositions of spaces and maps; and
- Obstruction theory.

The underlying theme of the entire book is the Eckmann-Hilton duality theory. This approach provides a unifying motif, clarifies many concepts, and reduces the amount of repetitious material. The subject matter is treated carefully with attention to detail, motivation is given for many results, there are several illustrations, and there are a large number of exercises of varying degrees of difficulty.

It is assumed that the reader has had some exposure to the rudiments of homology theory and fundamental group theory. These topics are discussed in the appendices. The book can be used as a text for the second semester of an algebraic topology course. The intended audience would be advanced undergraduates or graduate students. The book could also be used by anyone with a little background in topology who wishes to learn some homotopy theory.

Martin Arkowitz is currently a professor of mathematics at Dartmouth College. He received his Ph.D. in mathematics at Cornell University. His area of expertise is algebraic topology.