Providing Sound Foundations for Cryptography: On the Work of Shafi Goldwasser and Silvio Micali 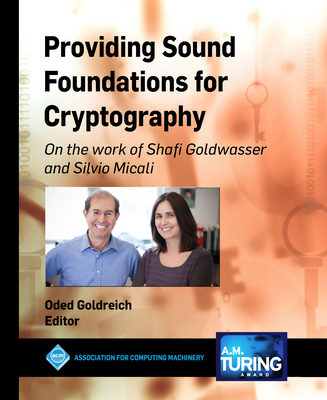 Cryptography is concerned with the construction of schemes that withstand any abuse.

A cryptographic scheme is constructed so as to maintain a desired functionality, even under malicious attempts aimed at making it deviate from its prescribed behavior. The design of cryptographic systems must be based on firm foundations, whereas ad hoc approaches and heuristics are a very dangerous way to go. These foundations were developed mostly in the 1980s, in works that are all co-authored by Shafi Goldwasser and/or Silvio Micali. These works have transformed cryptography from an engineering discipline, lacking sound theoretical foundations, into a scientific field possessing a well-founded theory, which influences practice as well as contributes to other areas of theoretical computer science.

This book celebrates these works, which were the basis for bestowing the 2012 A.M. Turing Award upon Shafi Goldwasser and Silvio Micali. A significant portion of this book reproduces some of these works, and another portion consists of scientific perspectives by some of their former students. The highlight of the book is provided by a few chapters that allow the readers to meet Shafi and Silvio in person. These include interviews with them, their biographies and their Turing Award lectures.

Oded Goldreich was born on February 4, 1957, in Israel. He received B.A., M.Sc., and D.Sc. degrees in Computer Science at the Technion-Israel Institute of Technology in 1980, 1982 and 1983, respectively. He was a postdoctoral fellow at MIT's Laboratory for Computer Science (1983-1986). Since 1995, he has been on the faculty of the Department of Mathematics and Computer Science of the Weizmann Institute of Science (Israel), where he is the incumbent of the Meyer W. Weisgal Professorial Chair. His current research interests include probabilistic proof systems, property testing, pseudorandomness, and complexity theory at large. Oded has made numerous contributions to the theory of computation, most notablly to the foundations of cryptography, pseudorandomness, probabilistic proof systems, property testing, and complexity theory at large.

He is the author of several books, including Foundations of Cryptography: Volumes 1 and 2 (2001 and 2004), Computational Complexity: A Conceptual Perspective (2008), P, NP, and NP-Completeness: The Basics of Complexity Theory (2010), and Introduction to Property Testing (2017).

Oded is an associate editor of the journal Computational Complexity, and was an editor of Journal of Cryptology and SIAM Journal on Computing. He has been an invited speaker at various conferences, including the 1994 International Congress of Mathematicians (ICM) and the Crypto '97 conference. He is a Corresponding Fellow of the Bavarian Academy of Sciences and Humanities, a Fellow of the International Association for Cryptologic Research (IACR), and a winner of the 2017 Donald E. Knuth Prize.