Computing and the National Science Foundation, 1950-2016: Building a Foundation for Modern Computing 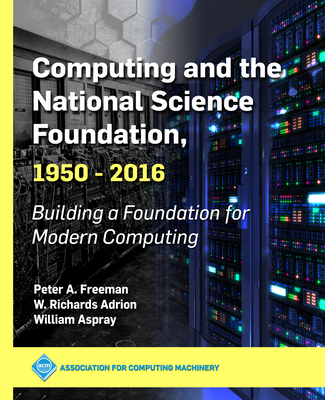 This organizational history relates the role of the National Science Foundation (NSF) in the development of modern computing.

Drawing upon new and existing oral histories, extensive use of NSF documents, and the experience of two of the authors as senior managers, this book describes how NSF's programmatic activities originated and evolved to become the primary source of funding for fundamental research in computing and information technologies.

The book traces how NSF's support has provided facilities and education for computing usage by all scientific disciplines, aided in institution and professional community building, supported fundamental research in computer science and allied disciplines, and led the efforts to broaden participation in computing by all segments of society.

Today, the research and infrastructure facilitated by NSF computing programs are significant economic drivers of American society and industry. For example, NSF supported work that led to the first widely-used web browser, Netscape; sponsored the creation of algorithms at the core of the Google search engine; facilitated the growth of the public Internet; and funded research on the scientific basis for countless other applications and technologies. NSF has advanced the development of human capital and ideas for future advances in computing and its applications.

This account is the first comprehensive coverage of NSF's role in the extraordinary growth and expansion of modern computing and its use. It will appeal to historians of computing, policy makers and leaders in government and academia, and individuals interested in the history and development of computing and the NSF.

Peter A. Freeman, a computer scientist (Carnegie Mellon University, 1970), was the seventh AD/CISE from 2002-2007 and DD/CCR from 1987-1989. Previously he held faculty positions at the University of California, Irvine and Georgia Tech, where he was Founding Dean of Computing in 1990. After NSF he returned to Georgia Tech as Emeritus Dean and Professor and was an active consultant with the Washington Advisory Group. While in academe he was an active researcher, educator, and participant in professional society activities. He is a fellow of the ACM, AAAS and IEEE.