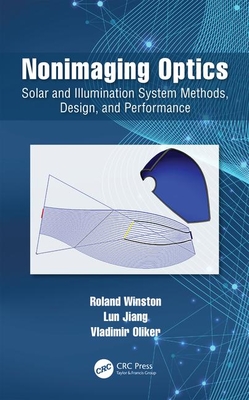 This book provides a comprehensive look at the science, methods, designs, and limitations of nonimaging optics. It begins with an in-depth discussion on thermodynamically efficient optical designs and how they improve the performance and cost effectiveness of solar concentrating and illumination systems. It then moves into limits to concentration, imaging devices and their limitations, and the theory of furnaces and its applications to optical design. Numerous design methods are discussed in detail followed by chapters of estimating the performance of a nonimaging design and pushing their limits of concentration. Exercises and worked examples are included throughout.

Dr. Roland Winston is a leading figure in the field of nonimaging optics and its applications to solar energy. He is the inventor of the compound parabolic concentrator (CPC), used in solar energy, astronomy, and illumination. He is also a Guggenheim Fellow, a Franklin Institute medalist, past head of the University of Chicago Department of Physics, and a member of the founding faculty of University of California Merced, and he is currently the Director of UC Solar.

Dr. Lun Jiang is a Research Scientist at UC Solar. His expertise is with vacuum devices, nonimaging optics and solar thermal and hybrid systems, solar cooling, and solar desalination. In his Ph.D. thesis he demonstrated two novel solar collectors that reach a working temperature above 200°C, without tracking. He led the receiver designing team for a vacuum hybrid receiver that generates both electricity and heat under 70x concentration, commissioned by Advance Research Project Agence-Energy (a segment of the U.S. Department Of Energy).

Vladimir Oliker received his PhD in mathematics from Leningrad University, USSR (former Soviet Union). He has published over a hundred papers in the fields of pure and applied mathematics. Since 1984 he has been developing theoretical and computational methods for design of freeform optics.