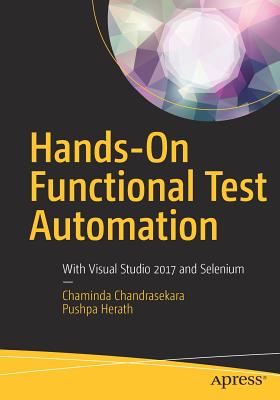 Get started with functional testing of both web apps and Windows apps using different test frameworks. This book will take you on a deep dive into integrating functional automation testing with deployment pipelines.

Hands-On Functional Test Automation contains step-by-step lessons that will give you an understanding of how to do functional test automation using Selenium with C# and Python. Also, you will learn how to enhance your test automation development with third-party frameworks. You will configure test clients, run functional tests through Azure DevOps release management, and carry out performance and load-testing to gain a good understanding of how to do cloud-based load testing. Each lesson comprises an introduction to the related concepts to help you understand how things work. This will broaden your knowledge so you can implement test automation in the correct way. At the end of each lesson alternative options and other enhancement possibilities are discussed to allow you to do further exploration.

- Use Visual Studio for load and performance testing

Chaminda is a Microsoft Most Valuable Professional (MVP) for Visual Studio ALM and Scrum Alliance Certified ScrumMaster(R), and focuses on and believes in continuous improvement of the software development life cycle. He works as a DevOps consultant for Jabil Circuit Sdn. Bhd. Chaminda is an active Microsoft Community Contributor (MCC), well recognized for his contributions in Microsoft forums, TechNet galleries, and Wikis, and contributes extensions to Visual Studio Team Services/TFS, in the Microsoft Visual Studio marketplace. He also contributes to other open source projects in GitHub. Pushpa is a senior test automation engineer at Datavail Lanka (Pvt) Ltd. She has many years of experience in QA automation. She is an expert on functional test automation using Selenium and Coded UI. Pushpa blogs on technology at. Pushpa has experience with Microsoft tools (C#, VSTS/TFS, SQL Server, and Azure) and open source tools (MAQS open framework and Sikuli).