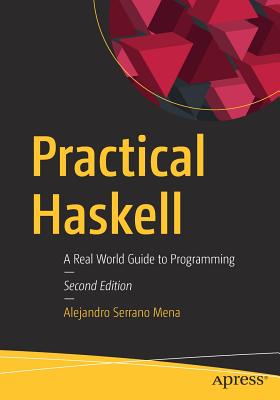 Get a practical, hands-on introduction to the Haskell language, its libraries and environment, and to the functional programming paradigm that is fast growing in importance in the software industry. This book contains excellent coverage of the Haskell ecosystem and supporting tools, include Cabal and Stack for managing projects, HUnit and QuickCheck for software testing, the Spock framework for developing web applications, Persistent and Esqueleto for database access, and parallel and distributed programming libraries.

You'll see how functional programming is gathering momentum, allowing you to express yourself in a more concise way, reducing boilerplate, and increasing the safety of your code. Haskell is an elegant and noise-free pure functional language with a long history, having a huge number of library contributors and an active community. This makes Haskell the best tool for both learning and applying functional programming, and Practical Haskell takes advantage of this to show off the language and what it can do.

Experienced programmers who may be new to the Haskell programming language. However, some prior exposure to Haskell is recommended.

Alejandro Serrano Mena is working towards his PhD thesis in the Software Technology group in Utrecht University. He is passionate about functional programming, and has been coding Haskell for personal and professional projects for more than five years. During his college years he was active in an association promoting functional languages among students, giving talks and helping programmers get started in the functional paradigm. In 2011 he took part in the Google Summer of Code program, enhancing the Haskell plug-in for the popular development environment Eclipse. His current position involves research for enhancing the way in which developers get feedback and interact with strong type systems such as Haskell's.