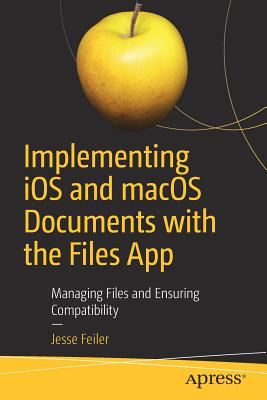 Rise above the basics of Xcode app development to implement tools like Share buttons and activity view controllers to share document content including parts of documents with other users and with other devices. This book fills the gap so that developers with even a fundamental knowledge of iOS and Swift can implement document creation, saving, and sharing in their apps.

Since the launch of iPhone in 2007, users and developers have struggled with the fact that the file system is hidden. Fortunately the Files app in iOS 11 now offers this feature and it is supported by Apple apps such as Numbers, Pages, and Keynote as well as by the few third-party apps that support documents. By using the standard formats described in this book, you can make your app's data shareable to and from other apps like Numbers, Pages, and Word. Files also provides an interface to tools such as Dropbox and iCloud so that users can open and modify documents in them. If you combine standard formats such as .doc, .docx, .jpeg, and .jpg with Dropbox and eMail, you have a simple way to implement and use cross-platform sharing to Macs, PCs, and Android devices. Implementing iOS and macOS Documents with the Files App provides the combination of skills developers need to build these types of apps--working with files and constructing documents.

Who This Book Is For
Developers with a basic knowledge of app development and Swift. You should already know how to use Xcode to create an app. Knowledge of basic Swift syntax is recommended. The book can also be a useful overview and guide to managers who are trying to decide how to convert legacy document-based systems to apps.

Jesse Feiler is a developer, consultant, and author specializing in database technologies and location-based apps. Jesse's apps include NP Risk, Minutes Machine, Utility Smart, Cyber Continuity, and Saranac River Trail. He has worked for organizations as varied as Federal Reserve Bank of New York (Chief, Special Projects Staff in Systems Development), Albers and Archipenko foundations (data management), and a number of database projects typically using FileMaker. His apps are available in the App Store and are published by Champlain Arts Corp (champlainarts.com). Jesse is heard regularly on WAMC Public Radio for the Northeast's The Roundtable. founder of Friends of Saranac River Trail, Inc. A native of Washington DC, he has lived in New York City and currently lives in Plattsburgh NY.