Haskell Quick Syntax Reference: A Pocket Guide to the Language, Apis, and Library 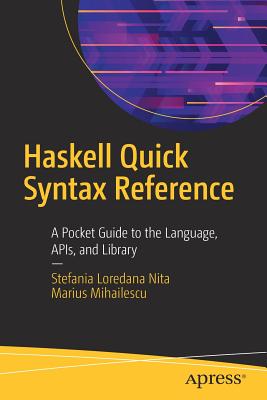 This condensed code and syntax reference presents the essential Haskell syntax in a well-organized format that can be used as a quick and handy reference, including applications to cloud computing and data analysis. This book covers the functional programming features of Haskell as well as strong static typing, lazy evaluation, extensive parallelism, and concurrency
You won't find any technical jargon, bloated samples, drawn out history lessons, or witty stories in this book. What you will find is a language reference that is concise, to the point and highly accessible. The Haskell Quick Syntax Reference is packed with useful information and is a must-have for any Haskell programmer working in big data, data science, and cloud computing.
What You Will Learn

Who This Book Is For
Experienced programmers who may be new to Haskell or have experience with Haskell and who just want a quick reference guide on it.