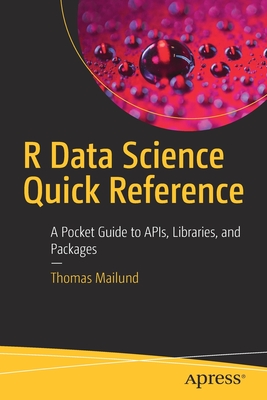 In this handy, practical book you will cover each concept concisely, with many illustrative examples. You'll be introduced to several R data science packages, with examples of how to use each of them.
In this book, you'll learn about the following APIs and packages that deal specifically with data science applications: readr, dibble, forecasts, lubridate, stringr, tidyr, magnittr, dplyr, purrr, ggplot2, modelr, and more.
After using this handy quick reference guide, you'll have the code, APIs, and insights to write data science-based applications in the R programming language. You'll also be able to carry out data analysis.

Who This Book Is For
Programmers new to R's data science, data mining, and analytics packages. Some prior coding experience with R in general is recommended.

Thomas Mailund is an associate professor at Aarhus University, Denmark. He has a background in math and computer science. For the last decade, his main focus has been on genetics and evolutionary studies, particularly comparative genomics, speciation, and gene flow between emerging species. He has published Beginning Data Science in R, Functional Programming in R, and Metaprogramming in R with Apress as well as other books.