SAP ABAP Objects: A Practical Guide to the Basics and Beyond 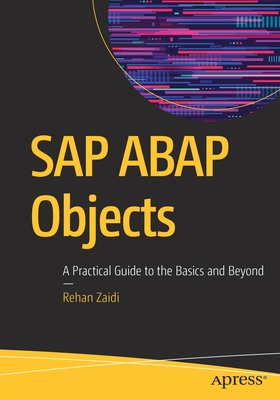 Understand ABAP objects--the object-oriented extension of the SAP language ABAP--in the latest release of SAP NetWeaver 7.5, and its newest advancements. This book begins with the programming of objects in general and the basics of the ABAP language that a developer needs to know to get started. The most important topics needed to perform daily support jobs and ensure successful projects are covered.

ABAP is a vast community with developers working in a variety of functional areas. You will be able to apply the concepts in this book to your area. SAP ABAP Objects is goal directed, rather than a collection of theoretical topics. It doesn't just touch on the surface of ABAP objects, but goes in depth from building the basic foundation (e.g., classes and objects created locally and globally) to the intermediary areas (e.g., ALV programming, method chaining, polymorphism, simple and nested interfaces), and then finally into the advanced topics (e.g., shared memory, persistent objects). You will know how to use best practices to make better programs via ABAP objects.

Rehan Zaidi is a consultant for several international SAP clients (both on-site and remote) and covers a wide range of SAP technical and functional requirements, and also provides writing and documentation services for their SAP- and ABAP-related products. He started working with SAP in 1999 and writing about his experiences in 2001. He has written several articles for both SAP Professional Journal and HR Expert, and also has a number of popular SAP- and ABAP-related books to his credit.

Rehan is co-founder of Rehan Technologies, which provides SAP consulting to companies and helps clients (both on-site and remote) with their SAP technical requirements (ABAP, Workflow, Quick development of Fiori apps, and S/4 HANA-related requirements). He also creates documentation and training manuals for a number of companies based in the USA.

Rehan is interested in providing publicity options to ERP consulting firms. His clients are located in a number of countries and continents, including the Middle East (GCC region) as well as North America and Europe. He also is currently working on a new ERP programmer magazine.