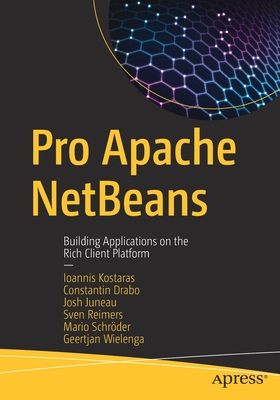 Take a detailed look at the NetBeans IDE and new features in the NetBeans Platform. Learn about support for JShell, the Jigsaw Module System, and Local Variable Type Inference, focusing on what this new version of NetBeans brings to developers who are working in Java and other supported languages. The book is a practical, hands-on guide providing a number of step-by-step recipes that help you take advantage of the power in the latest Java (and other) software platforms, and gives a good grounding on using NetBeans IDE for your projects. This book has been written by Apache community members who both use the IDE and actively contribute and develop Apache NetBeans as an open source project.
Pro Apache NetBeans consists of three parts. The first part describes how to use the IDE as well as the new features that it brings to support the latest Java versions. The second part describes how you can extend NetBeans by creating plugins and writing your own applications using the Rich Client Platform. The third part describes how you can contribute to develop NetBeans IDE further, becoming part of the open source team that is driving future developments in the toolset. What You Will Learn
Who This Book Is For
Developers who want to know the latest features in NetBeans, as well as how the transition to Apache has affected the future of the NetBeans IDE. The book is also of interest to those desiring to become contributors to the NetBeans project and to influence its future development. Java developers who need to create a new desktop application from scratch also will benefit from this book.

Ioannis (​John) Kostaras graduated from the Informatics Department at the University of Athens. He also holds a Master of Science degree in Telecommunications from the Electronics Systems Engineering department of Essex University, and a Master of Arts degree in Management Studies from Essex University. John is a software architect in a big organization and has been a Java developer since JDK 1.0 was released. One of the many applications he has written for the industry, developed in the NetBeans Rich Client Platform, was awarded the 2012 Duke's Choice Community Choice Award. He is also a member of the NetBeans Dream Team. Apart from Java, he speaks other languages, too, such as C/C++, C#, Python, Ruby, Erlang, and Visual Basic. He has written a number of articles in JavaCodeGeeks, and in the NetBeans wiki, and is preparing an online course for Java in Greek in the Mathesis platform, teaching the latest Java and Apache NetBeans to audiences speaking Greek.
Constantin Drabo earned a master's degree from the Université de Picardie Jules Verne (France) in Internet Technologies. He is a software engineer in the National Treasury of Burkina Faso, and is a part-time teacher at the Université Nazi Boni of Bobo-Dioulasso, where he teaches on Java/Java EE and the Human/Machine Interface. He participates in the Java Community Process (JCP) through his contribution to JSR 381 (Visual Recognition). Constantin is a member of the NetBeans Dream Team, and creator of the FasoJUG Java User Group. He is currently studying for his PhD in Machine Learning in Medical Systems.
Josh Juneau has been developing software and database systems for several years. Database application development and sophisticated web apps have been the focus of his career since the beginning. Early in his career, he became an Oracle database administrator and adopted the PL/SQL language for performing administrative tasks and developing applications for Oracle database. In an effort to build more complex solutions, he began to incorporate Java into his PL/SQL applications, and later developed standalone and web applications with Java. Josh wrote his early Java web applications utilizing JDBC to work with backend databases. Later, he incorporated frameworks into his enterprise solutions, including Java EE, Spring, and JBoss Seam. Today, he primarily develops enterprise web solutions utilizing Java EE. He is an avid contributor to Oracle's Java Magazine, speaks at conferences and Java user group events, contributes to the Chicago Java User Group, and is an Apache NetBeans committer and a Java Champion.
Sven Reimers is based at Lake Constance in southern Germany where he works as a systems engineer for Airbus Defense and Space creating next-generation ground segment software for space systems. He has more than 20 years experience building complex software systems, and more than 20 years experience with Java. In 2009 Reimers was the winner of the Duke`s Choice Award in the Network Solutions category for ND SatCom Satellite Communication Management Software. He is part of the Apache NetBeans PMC, a contributor to OpenJFX, and leader and founder of JUG Bodensee. For his long-term commitment to Java and the community, Reimers was named a Java Champion in 2014. Mario Schröder earned a master's degree in civil engineering from the University of Rostock in Germany. However, he discovered his passion for computer science during his studies and made programming and software development into his profession. He started working with Java professionally in 2001. His first contact with NetBeans was in 2004. He was a member of the NetCat team for Version 7.2, has contributed patches to the platform, and has developed several plugins. Geertjan Wielenga is a product manager in the NetBeans team. He lives and works in Amsterdam. He is a Java technology enthusiast, evangelist, trainer, speaker, and writer. He studied law at the University of Natal in Pietermaritzburg (South Africa). In early 1996, however, he found himself as a proofreader for a software organization in the Netherlands called SuperNova. After having worked at various other software organizations in the Netherlands, he moved to Vienna, Austria and worked for Coca-Cola's ERP system. In 2004 he moved to Prague, Czech Republic, to work on a free and open source called NetBeans IDE. He discovered that NetBeans IDE was a unique product, project, and ecosystem. Geertjan became inspired and continually enthused by the open source ecosystem and the central role that the NetBeans community was playing in it. He is happy and proud of the role NetBeans has played in Java's 20+ years of existence, and of as his own small personal contributions to the process.