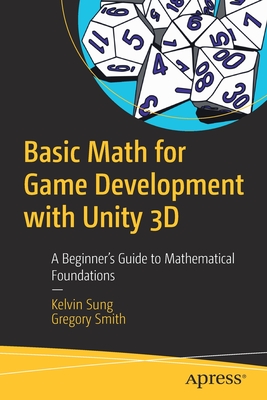 Use Unity-based examples to understand fundamental mathematical concepts and see how they are applied when building modern video game functionality. You will gain the theoretical foundation you need, and you will know how to examine and modify an implementation.

This book covers points in a 3D Cartesian coordinate system, and then discusses vectors and the details of dot and cross products. Basic mathematical foundations are illustrated through Unity-based example implementations. Also provided are examples showing how the concepts are applied when implementing video game functionality, such as collision support, motion simulations, autonomous behaviors, shadow approximations, and reflection off arbitrary walls.

Throughout this book, you learn and examine the concepts and their applications in a game engine.

Who This Book is For

Beginners, and those interested in the implementation of interactive games, who need a basic mathematical background or a refresher with modern examples

Kelvin Sung is a professor with the Computing and Software Systems division at the University of Washington Bothell (UWB). He received his PhD in Computer Science from the University of Illinois at Urbana-Champaign. Kelvin's background is in computer graphics, hardware, and machine architecture. He came to UWB from Alias-Wavefront (now part of Autodesk), where he played a key role in designing and implementing the Maya Renderer, an Academy Award-winning image generation system. At UWB, funded by Microsoft Research and the National Science Foundation, Kelvin's work focuses on the intersection of video game mechanics, solutions to real-world problems, and mobile technologies. He has co-authored four books: one in computer graphics and the others in 2D game engines, including publishing with APress.

Gregory Smith is a graduate student in the Computer Science and Software Engineering degree program at the University of Washington Bothell. He received his undergraduate degree in Computer Science from Northwest Nazarene University in 2018. Greg is interested in machine learning, AI, and video game design. As his senior capstone project, he worked on the FireMAP project at Northwest Nazarene University where he applied machine learning algorithms to analyze drone images in order to map burned areas left by wildfires to achieve faster and safer recovery efforts. He was also a software engineer tester at a local company while pursuing his undergraduate degree. Currently, Greg is working on a project that focuses on allowing users of virtual and augmented realities to communicate and interact with each other within these mixed reality environments.