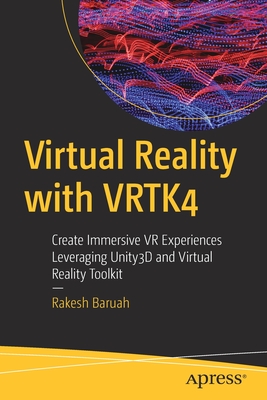 From game design to education to healthcare to human resources, virtual reality offers new and creative ways to engage users, students, patients, customers, and more. Not a coding book, Virtual Reality with VRTK4 shows that you don't need to be a computer or graphics whiz to begin creating your own virtual reality experiences.

Creative professionals or students who are familiar with computer design programs and want to begin prototyping their own original virtual reality work as quickly as possible.

Rakesh Baruah is a writer and creator with 15 years of experience in new media, film, and television in New York City. After completing an MFA in screenwriting and directing for film from Columbia University. Rakesh joined the writers' room of a hit, primetime, network drama as an assistant. The experience opened his eyes to the limits of television and the opportunities promised by 3D, immersive content. In 2016 he began a self-guided journey toward virtual reality design that has taken him through startups, bootcamps, the Microsoft offices and many, many hours in front of a computer. He shares what he's learned with you in a style and format designed specifically for the person who in high school, preferred English class to Trigonometry.