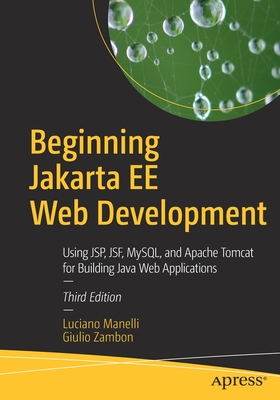 Key concepts are made easy to grasp with numerous working examples and a walk-through of the development of a complete ecommerce project. This book is written for professionals by practicing Java web application professionals and experts.

Luciano Manelli earned a PhD in computer science from the IT department, University of Bari - Aldo Moro. His PhD focused on grid computing and formal methods, and he published the results in international publications. Luciano obtained several certificates in the IT sector, and, in 2014, began working for the Port Network Authority of the Ionian Sea - Port of Taranto, after working for 13 years for InfoCamere SCpA. He has worked mainly in the design, analysis, and development of large software systems; research and development; testing; and production with roles of increasing responsibility in several areas over the years. Luciano has developed a great capability to make decisions in a technical and business context and is mainly interested in project management and business process management. In his current position, he deals with port community systems and software innovation. Additionally, he has written several IT books and is a contract professor at the Polytechnic of Bari (foundations of computer science), and at the University of Bari - Aldo Moro (programming for web, computer science, and computer lab).
Giulio Zambon's first love was physics, but he decided to dedicate himself to software development more than 30 years ago: back when computers were still made of transistors and core memories, programs were punched on cards, and Fortran only had arithmetic IFs. Over the years, he learned a dozen computer languages and worked with all sorts of operating systems. His specific interests were in telecom and real-time systems, and he managed several projects to their successful completion. In 2001 Giulio founded his own company offering computer telephony integration (CTI) services, and he used JSP and Tomcat exclusively to develop the web side of the service platform. Back in Australia after many years in Europe, he now dedicates himself to writing software to generate and solve numeric puzzles.