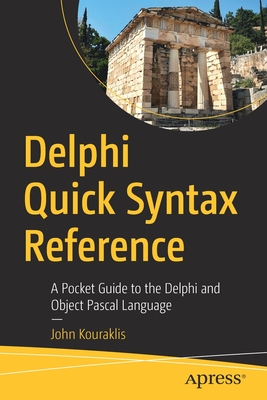 The Delphi Quick Syntax Reference is a succinct code and syntax reference guide to Delphi. It presents the fundamental knowledge to get newcomers started with the language and provides a refresher to seasoned or returning Delphi developers.
It covers all the new features added by Embarcadero during the last few years. Delphi celebrates 25 years in 2020 and, alongside the free community version that was introduced a couple of years ago, this syntax guide is a great way to get into the language.
What You Will LearnWho This Book Is For
Returning or current Delphi developers: The book is a resource for reference for this group of developers especially for the new features that were introduced in the language over the last couple of years. Newcomers to the language: These developers will learn the fundamentals of the language in a very condensed and effective text that accelerates learning.

John Kouraklis started exploring computers when he was 16 and since then has followed all the way from Turbo Pascal to Delphi and Delphi Tokyo as a hobby initially and as a profession for most of his adult life. He has developed a wide range of applications, from financial software to reverse engineering tools, including an application for professional gamblers. He is part of the Delphi community and participates in online communities, forums, and many other events. For example, he is active on Delphi Praxis, which is perhaps the biggest English-speaking online forum about Delphi. John also has a personal website where he posts articles regularly. Lastly, he has written two books about Delphi published by Apress.