Blockchain Enabled Applications: Understand the Blockchain Ecosystem and How to Make It Work for You 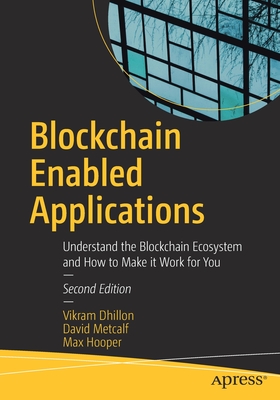 Learn all about blockchain and its applications in cryptocurrency, healthcare, Internet of Things, finance, decentralized organizations, and more. Featuring case studies and practical insights, this book covers a unique mix of topics and offers insight into how to overcome hurdles that arise as the market and consumers grow accustomed to blockchain-based organizations and services.

The book is divided into three major sections. The first section provides a historical background to blockchain technology. You will start with a historical context to financial capital markets when Bitcoin was invented, followed by mining protocols, the need for consensus, hardware mining, etc. Next, a formal introduction to blockchain is provided covering transaction workflow, role of decentralized network, and payment verification. Then, we dive deep into a different implementation of a blockchain: Ethereum. The main technical features, such as Ethereum Virtual Machine, are presented along with the smart contract programming language, Solidity. In this second section, you will look at some modern use cases for blockchain from a decentralized autonomous organization, high-performance computing in Ethereum and off-grid computations, and healthcare and scientific discovery. The final section of the book looks toward the future of blockchain. This is followed by chapters covering the rise of consortia in the blockchain world, the Hyperledger project, particularly the updates since 2018, and a chapter on educational blockchain games. This is followed by updates to EOS.IO, Chain Core, and Quorum, ICOs and a look at the major changes to financial markets brought about by blockchain and decentralized networks.


What You Will Learn

Blockchain developers interested in keeping up with the newest updates and students looking for a broad overview of this vast ecosystem, plus business executives who want to make informed product decisions about including blockchain as well as policy makers who want a better understanding of the current use cases

Vikram Dhillon is an internal medicine resident physician at Wayne State University, Detroit Medical Center and a research fellow at the Institute of Simulation and Training, University of Central Florida (UFC). He holds a bachelor of science degree in molecular biology from the University of Central Florida where his main focus was bioinformatics, a Doctor of Osteopathic Medicine, and a doctoral degree from Nova Southeastern University. He has published multiple scientific papers on computational genomics. He has worked as a software and business development coach at the Blackstone Launchpad to mentor young entrepreneurs and startups through the process of building technology products. He was previously funded by the National Science Foundation through the Innovation Corps program to study customer discovery and apply it to commercialize high-risk startup ideas. He is a member of the Linux Foundation and has been involved in open-source projects and initiatives for the past several years. He often speaks at local conferences and meetups about programming, design, security, and entrepreneurship.

David Metcalf is a serial entrepreneur who has launched multiple successful ventures and spinoff companies. He has reviewed thousands of emerging technology companies as an advisor and investor. He is the Director of the Mixed Emerging Technology Integration Lab at UCF's Institute for Simulation and Training. His past projects involving XR and IoT span across education, health, space, cyber, and transportation. Current efforts include smart cities, blockchain, and enterprise learning transformation for government and industry. He is the co-editor/author of Voice Technology in Healthcare (2020) and Blockchain in Healthcare (2019) as part of the HIMSS Emerging Technology Series, Blockchain Enabled Applications (2018), Connected Health (2017), HIMSS mHealth Innovation (2014), and the HIMSS best-seller mHealth: From Smartphones to Smart Systems (2012).

Max Hooper is the chief executive officer of Merging Traffic. He is responsible for the company's management and growth strategy, serving as the corporate liaison to the financial services industry and various capital formation groups. Prior to starting the company, he was co-founder of Equity Broadcasting Corporation (EBC), a media company that owned and operated more than 100 television stations across the United States. He was responsible for activities in the cable, satellite, investment banking, and technology industries, and during his tenure, it grew to become one of the top 10 largest broadcasting companies in the country. He is a lifelong learner and has earned five doctorate degrees: PhD, DMin, PhD, ThD, and DMin from a variety of institutions. Hooper studied financial technology with cohorts at MIT, and cryptocurrency and business disruption with cohorts at the London School of Economics. As an avid runner, he has completed more than 100 marathons and an additional 20 ultra-marathons, which are 50- or 100-mile runs. He has completed the Grand Slam of Ultra Running. He is committed to his family and is a husband, father to five children, and grandfather to seven grandsons. He is active in many organizations and serves on various boards of directors. He works globally with several ministries and nonprofit aid groups and was honored to speak at the United Nations in New York in 2015.