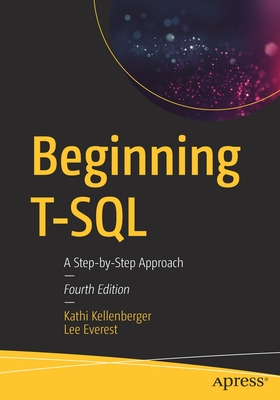 Get a performance-oriented introduction to the T-SQL language underlying the Microsoft SQL Server and Azure SQL database engines. This fourth edition is updated to include SQL Notebooks as well as up-to-date syntax and features for T-SQL on-premises and in the Azure cloud. Exercises and examples now include the WideWorldImporters database, the newest sample database from Microsoft for SQL Server. Also new in this edition is coverage of JSON from T-SQL, news about performance enhancements called Intelligent Query Processing, and an appendix on running SQL Server in a container on macOS or Linux.

Beginning T-SQL starts you on the path to mastering T-SQL with an emphasis on best practices. Using the sound coding techniques taught in this book will lead to excellent performance in the queries that you write in your daily work. Important techniques such as windowing functions are covered to help you write fast-executing queries that solve real business problems.The book begins with an introduction to databases, normalization, and to setting up your learning environment. You will learn about the tools you need to use such as SQL Server Management Studio, Azure Data Studio, and SQL Notebooks. Each subsequent chapter teaches an aspect of T-SQL, building on the skills learned in previous chapters. Exercises in most chapters provide an opportunity for the hands-on practice that leads to true learning and distinguishes the competent professional.

A stand-out feature in this book is that most chapters end with a Thinking About Performance section. These sections cover aspects of query performance relative to the content just presented, including the new Intelligent Query Processing features that make queries faster without changing code. They will help you avoid beginner mistakes by knowing about and thinking about performance from day 1.

Anyone who wants to learn T-SQL from the beginning or improve their T-SQL skills; those who need T-SQL as an additional skill; and those who write queries such as application developers, database administrators, business intelligence developers, and data scientists. The book is also helpful for anyone who must retrieve data from a SQL Server database.

Kathi Kellenberger is an editor and DevOps advocate at Redgate Software and a Microsoft Data Platform MVP. She has been working with SQL Server for over 20 years, starting with version 6.5. She has worked as a developer, database administrator, and consultant. Kathi has been involved with almost 20 book projects as an author, co-author, or technical editor, and enjoys presenting at events, webinars, and user groups. When not working, she teaches T-SQL to beginners at a non-profit in St. Louis, Missouri that helps people transition to tech careers.
Lee Everest is a SQL Server developer who has worked with the product since version 6.5. He has taught part-time at Dallas College North Lake Campus for 18 years, and has had several students move on to companies such as Microsoft, filling roles from support engineer to data scientist to vice president. When Lee isn't working, he enjoys computers, golf, and fishing.