Introducing Blockchain with LISP: Implement and Extend Blockchains with the Racket Language 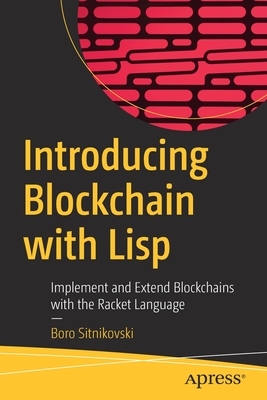 Implement blockchain from scratch covering all the details with Racket, a general-purpose Lisp. You'll start by exploring what a blockchain is, so you have a solid foundation for the rest of the book. You'll then be ready to learn Racket before starting on your blockchain implementation. Once you have a working blockchain, you'll move onto extending it. The book's appendices provide supporting resources to help you in your blockchain projects.

The recommended approach for the book is to follow along and write the code as it's being explained instead of reading passively. This way you will get the most out of it. All of the source code is available for free download from GitHub.

Boro Sitnikovski has over ten years of experience working professionally as a software engineer. He started programming with assembly on an Intel x86 at the age of ten. While in high school, he won several prizes in competitive programming, varying from 4th, 3rd, and 1st place. He is an informatics graduate - his bachelor's thesis was titled "Programming in Haskell using algebraic data structures", and his master's thesis was titled "Formal verification of Instruction Sets in Virtual Machines". He has also published a few papers on software verification. Other research interests of his include programming languages, mathematics, logic, algorithms, and writing correct software. He is a strong believer in the open-source philosophy and contributes to various open-source projects. In his spare time, he enjoys some time off with his family.