Hands-On Smart Contract Development with Solidity and Ethereum: From Fundamentals to Deployment 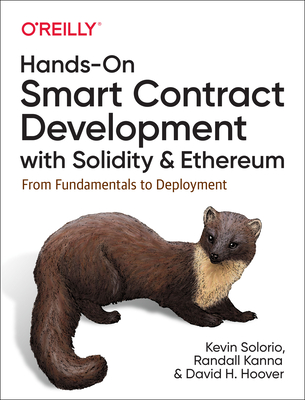 Learn how to design, develop, and deploy smart contracts on the Ethereum blockchain. With this practical book, software developers with a high-level understanding of the blockchain will use the Solidity programming language to write decentralized applications (dApps) using the web3.js library.

Smart contracts have allowed technologists to create a new breed of software systems that have ushered in the next revolution in human organization. David Hoover and Kevin Solorio teach you the fundamentals of Solidity, as well as key topics such as unit testing, deployment, and preventing security vulnerabilities. You'll also learn how to leverage the built-in public/private key cryptography in the Ethereum protocol.

A self-taught software engineer since 2000, Dave has been intrigued by how people learn to program for decades. Dave co-founded Dev Bootcamp in 2012 and was co-author of Apprenticeship Patterns in 2009. In 2015, Dave fell down the blockchain rabbit hole and soon after landed at ConsenSys where he focused on Solidity and reusability. Dave is currently the Chief Squirrel at Red Squirrel Technologies, a consultancy focused on smart contract audits, engineering, and coaching.

Kevin has been developing software for nearly 10 years developing applications on web and mobile platforms. In addition to writing software, he spent nearly 4 years teaching and writing curriculum for Dev Bootcamp and is eager to bring his education experience to helping developers learn the fundamentals of blockchain application development.