The AI Ladder: Accelerate Your Journey to AI 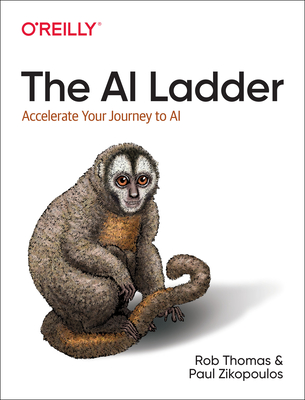 AI may be the greatest opportunity of our time, with the potential to add nearly $16 trillion to the global economy over the next decade. But so far adoption has been much slower than anticipated. With this practical report, business leaders will discover where they are in their AI journey and learn the steps they still need to take to implement an AI solution in their organization.

Author Rob Thomas, general manager of data and AI at IBM, introduces C-suite executives and line-of-business professionals to the AI Ladder--a unified, prescriptive approach to help them accelerate their AI journey, no matter where they are in the process. This succinct report explores AI's drivers, value, and opportunity, as well as the adoption challenges organizations now face.

Rob was previously the General Manager of IBM Data and Watson AI. Under his leadership, IBM has emerged as a leader in data and AI, spanning databases, data integration and governance, business intelligence, financial planning, data science and AI tools, and AI applications. Since joining IBM's software unit, Rob has held roles of increasing responsibility and overseen 4 acquisitions by the firm, representing over $2.5 billion in transaction value.

Born in Florida, Rob earned his BA in Economics at Vanderbilt University and earned his MBA at the University of Florida, Rob serves on the board of Domus (Stamford, CT), which assists underprivileged children in Fairfield county.

Paul C. Zikopoulos is the Vice President of Cognitive BigData Systems at IBM. Paul has more than 23 years of experience in data, and is seen as a global expert in Big Data and Analytic technologies. Independent groups often recognize Paul as a thought leader with nominations to SAP's"Top 50 Big Data Twitter Influencers", Maptive's "Top 100 Big Data Experts to Follow in 2016", "Big Data Republic's "Most Influential", Onalytica's "Big Data Top 100 Influencers and Brands", and Analytics Week "Thought Leaders in Big Data and Analytics" lists. Big Data Made Simple noted him as one of the "Top 200 Big Data Thought Leaders on Twitter", Technopedia listed him one of its "Big Data Experts to Follow", and GreyCampus included him on their list of "150 Most Influential People in Big Data & Hadoop". He has also been featured on "60 Minutes", speaking on the topic of Big Data, and advises various universities on their graduate-level analytics programs.

Paul has written hundreds of magazine articles and 19 books, including "Big Data: Beyond the Hype", "Hadoop for Dummies", "Harness the Power of Big Data", "Understanding Big Data", "New Dynamic InMemory Analytics for the Era of Big Data", "Risk Free Agile Scaling", "DB2 Certification for Dummies", and "DB2 for Dummies. In his spare time, Paul is active in bolstering Women in Technology and is an advisory board member for Women 2.0, which works to close the gender gaps in tech companies. Paul enjoys all sorts of sporting activities (including the futile resistance and transformation into a "Horse Dad"). Ultimately, Paul is trying to figure out the world according to Chloë--his daughter, whom he notes didn't come with a handbook and is more complex than the topic of BigData, but more fun too. Find him on Twitter @BigData_paulz.