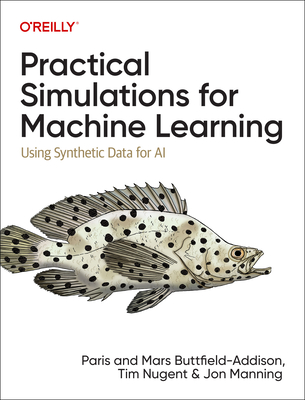 With this practical book, you'll explore the possibilities of simulation- and synthesis-based machine learning and AI, with a focus on deep reinforcement learning and imitation learning techniques. AI and ML are increasingly data driven, and simulations are a powerful, engaging way to unlock their full potential.

With this deeply practical book, you'll learn how to:

Dr. Paris Buttfield-Addison is cofounder of Secret Lab (https: //www.secretlab.com.au and @TheSecretLab on Twitter), a game development studio based in beautiful Hobart, Australia. Secret Lab builds games and game development tools, including the multi-award winning ABC Play School iPad games, Night in the Woods, the Qantas airlines Joey Playbox games, and the Yarn Spinner narrative game framework. Paris formerly worked as mobile product manager for Meebo (acquired by Google), has a degree in medieval history, a PhD in Computing, and writes technical books on mobile and game development (more than 20 so far) for O'Reilly Media. Paris particularly enjoys game design, statistics, law, machine learning, and human-centred technology research. He can be found on Twitter at @parisba and online at http: //paris.id.au.

Dr. Jon Manning is the cofounder of Secret Lab, an independent game development studio. He's written a whole bunch of books for O'Reilly Media about Swift, iOS development, and game development, and has a doctorate about jerks on the internet. He's currently working on Button Squid, a top-down puzzler, and on the critically acclaimed award winning adventure game Night in the Woods, which includes his interactive dialogue system Yarn Spinner. Jon can be found on Twitter at @desplesda, and online at http: //desplesda.net.

Marina Rose Geldard (Mars) is a technologist from Down Under in Tasmania. Entering the world of technology relatively late as a mature-age student, she has found her place in the world: an industry where she can apply her lifelong love of mathematics and optimization. She compulsively volunteers at industry events, dabbles in research, and serves on the executive committee for her state's branch of the Australian Computer Society (ACS) as well as the AUC. She loves data science, machine learning, and science-fiction. She can be found on Twitter @TheMartianLife and online at https: //themartianlife.com.

Dr. Tim Nugent pretends to be a mobile app developer, game designer, tools builder, researcher, and tech author. When he isn't busy avoiding being found out as a fraud, he spends most of his time designing and creating little apps and games that he won't let anyone see. Tim spent a disproportionately long time writing this tiny little bio, most of which was spent trying to stick a witty sci-fi reference in, before he simply gave up. Tim can be found on Twitter at @The_McJones, and online at http: //lonely.coffee.