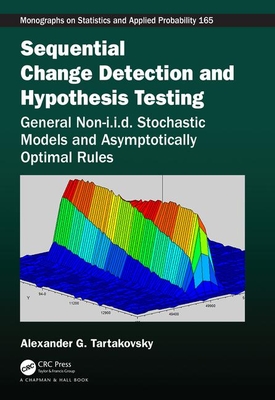 How can major corporations and governments more quickly and accurately detect and address cyberattacks on their networks? How can local authorities improve early detection and prevention of epidemics? How can researchers improve the identification and classification of space objects in difficult (e.g., dim) settings?

These questions, among others in dozens of fields, can be addressed using statistical methods of sequential hypothesis testing and changepoint detection. This book considers sequential changepoint detection for very general non-i.i.d. stochastic models, that is, when the observed data is dependent and non-identically distributed. Previous work has primarily focused on changepoint detection with simple hypotheses and single-stream data. This book extends the asymptotic theory of change detection to the case of composite hypotheses as well as for multi-stream data when the number of affected streams is unknown. These extensions are more relevant for practical applications, including in modern, complex information systems and networks. These extensions are illustrated using Markov, hidden Markov, state-space, regression, and autoregression models, and several applications, including near-Earth space informatics and cybersecurity are discussed.

This book is aimed at graduate students and researchers in statistics and applied probability who are familiar with complete convergence, Markov random walks, renewal and nonlinear renewal theories, Markov renewal theory, and uniform ergodicity of Markov processes.

Alexander Tartakovsky is a Professor and Head of the Space Informatics Laboratory at the Moscow Institute of Physics and Technology and President of AGT StatConsult, Los Angeles, California, USA. From 1997 to 2013, he was a Professor at the Department of Mathematics and the Associate Director of the Center for Applied Mathematical Sciences at the University of Southern California, Los Angeles. From 2013 to 2015, he was a Professor at the Department of Statistics at the University of Connecticut at Storrs. He is a fellow of the Institute of Mathematical Statistics and a recipient of the 2007 Abraham Wald Award in Sequential Analysis. His research interests include theoretical and applied statistics, sequential analysis, changepoint detection phenomena, statistical image and signal processing, video surveillance and object detection and tracking, information integration/fusion, cybersecurity, and detection and tracking of malicious activity. He is the author of three books, several book chapters, and over 150 journal and conference publications.