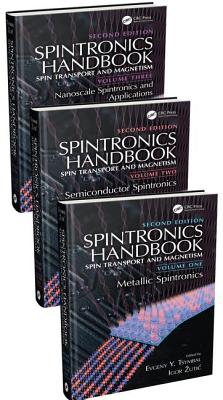 The second edition offers an update on the single most comprehensive survey of the two intertwined fields of spintronics and magnetism, covering the diverse array of materials and structures, including silicon, organic semiconductors, carbon nanotubes, graphene, and engineered nanostructures. It focuses on seminal pioneering work, together with the latest in cutting-edge advances, notably extended discussion of two-dimensional materials beyond graphene, topological insulators, skyrmions, and molecular spintronics. The main sections cover physical phenomena, spin-dependent tunneling, control of spin and magnetism in semiconductors, and spin-based applications.

Evgeny Tsymbal is a George Holmes University Distinguished Professor at the Department of Physics and Astronomy of the University of Nebraska-Lincoln (UNL), Director of the UNL's Materials Research Science and Engineering Center (MRSEC), and Director of the multi-institutional Center for NanoFerroic Devices (CNFD). He joined UNL in 2002 as an Associate Professor, was promoted to a Full Professor with Tenure in 2005 and named a Charles Bessey Professor of Physics in 2009 and George Holmes University Distinguished Professor in 2013. Prior to his appointment at UNL he was a research scientist at University of Oxford, United Kingdom, a research fellow of the Alexander von Humboldt Foundation at the Research Center-Jülich, Germany, and a research scientist at the Russian Research Center "Kurchatov Institute", Moscow. Evgeny Tsymbal's research is focused on computational materials science aiming at the understanding of fundamental properties of advanced ferromagnetic and ferroelectric nanostructures and materials relevant to nanoelectronics and spintronics. He has published over 200 papers, review articles and book chapters and presented over 150 invited talks. Evgeny Tsymbal is a fellow of the American Physical Society, a fellow of the Institute of Physics, UK, and a recipient of the UNL's College of Arts & Sciences Outstanding Research and Creativity Award (ORCA).

Igor Zutic received his Ph.D. in theoretical physics at the University of Minnesota, after undergraduate studies at the University of Zagreb, Croatia. He was a postdoc at the University of Maryland and the Naval Research Lab. In 2005 he joined the State University of New York at Buffalo as an Assistant Professor of Physics and got promoted to an Associate Professor in 2009 and to a Full Professor in 2013. He proposed and chaired Spintronics 2001: International Conference on Novel Aspects of Spin-Polarized Transport and Spin Dynamics, at Washington DC. Work with his collaborators spans a range of topics from high-temperature superconductors and ferromagnetism that can get stronger as the temperature is increased, to prediction of various spin-based devices (some of which were experimentally demonstrated). He has published over 80 refereed articles and given over 110 invited presentations on spin transport, magnetism, spintronics, and superconductivity. Igor Zutic is a recipient of 2006 National Science Foundation CAREER Award, 2005 National Research Council/American Society for Engineering Education Postdoctoral Research Award, and the National Research Council Fellowship (2003-2005). His research is supported by the National Science Foundation, the Office of Naval Research, the Department of Energy, and the Airforce Office of Scientific Research.