Andy Grove: The Life and Times of an American Business Icon 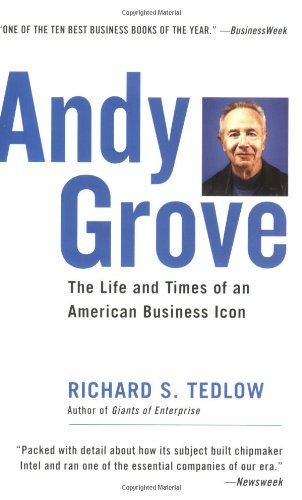 Any short list of the world’s most admired business people would include Andy Grove, the chairman and CEO of Intel during its years of explosive growth. During Grove’s career, Intel became the model for Silicon Valley. Silicon Valley became the model for the world. And Grove became Time’s Man of the Year—an icon of the promise of the American life.

Born in Hungary in 1936, Grove survived the Holocaust only to face the Soviet invasion. He escaped to New York, penniless, at age twenty, and embraced America, putting himself through college and graduate school. He joined Intel at its founding in 1968, rose to CEO in 1987, then led the company into the stratosphere, with compound annual profit growth at 34 percent for the next eleven years.

Despite decades of media scrutiny and six of Grove’s own books, there remains a powerful element of mystery about him. This definitive biography, by a Harvard Business School professor with unprecedented access, finally cracks the code of who Andy Grove really is, how his mind works, how he attacks impossible problems, and how he leads others to exceed their own expectations of themselves.