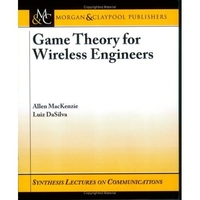 The application of mathematical analysis to wireless networks has met with limited success, due to the complexity of mobility and traffic models, coupled with the dynamic topology and the unpredictability of link quality that characterize such networks. The ability to model individual, independent decision makers whose actions potentially affect all other decision makers makes game theory particularly attractive to analyze the performance of ad hoc networks.

Game theory is a field of applied mathematics that describes and analyzes interactive decision situations. It consists of a set of analytical tools that predict the outcome of complex interactions among rational entities, where rationality demands a strict adherence to a strategy based on perceived or measured results. In the early to mid-1990's, game theory was applied to networking problems including flow control, congestion control, routing and pricing of Internet services. More recently, there has been growing interest in adopting game-theoretic methods to model today's leading communications and networking issues, including power control and resource sharing in wireless and peer-to-peer networks.

This work presents fundamental results in game theory and their application to wireless communications and networking. We discuss normal-form, repeated, and Markov games with examples selected from the literature. We also describe ways in which learning can be modeled in game theory, with direct applications to the emerging field of cognitive radio. Finally, we discuss challenges and limitations in the application of game theory to the analysis of wireless systems. We do not assume familiarity with game theory. We introduce major game theoretic models and discuss applications of game theory including medium access, routing, energy-efficient protocols, and others. We seek to provide the reader with a foundational understanding of the current research on game theory applied to wireless communications and networking.