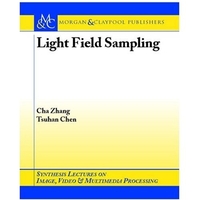 Light field is one of the most representative image-based rendering techniques that generate novel virtual views from images instead of 3D models. The light field capture and rendering process can be considered as a procedure of sampling the light rays in the space and interpolating those in novel views. As a result, light field can be studied as a high-dimensional signal sampling problem, which has attracted a lot of research interest and become a convergence point between computer graphics and signal processing, and even computer vision.

This lecture focuses on answering two questions regarding light field sampling, namely how many images are needed for a light field, and if such number is limited, where we should capture them. The book can be divided into three parts.

First, we give a complete analysis on uniform sampling of IBR data. By introducing the surface plenoptic function, we are able to analyze the Fourier spectrum of non-Lambertian and occluded scenes. Given the spectrum, we also apply the generalized sampling theorem on the IBR data, which results in better rendering quality than rectangular sampling for complex scenes. Such uniform sampling analysis provides general guidelines on how the images in IBR should be taken. For instance, it shows that non-Lambertian and occluded scenes often require a higher sampling rate.