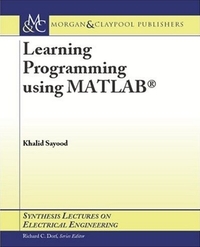 This book is intended for anyone trying to learn the fundamentals of computer programming. The chapters lead the reader through the various steps required for writing a program, introducing the MATLABr® constructs in the process. MATLABr® is used to teach programming because it has a simple programming environment. It has a low initial overhead which allows the novice programmer to begin programming immediately and allows the users to easily debug their programs. This is especially useful for people who have a "mental block" about computers. Although MATLABr® is a high-level language and interactive environment that enables the user to perform computationally intensive tasks faster than with traditional programming languages such as C, C++, and Fortran, the author shows that it can also be used as a programming learning tool for novices. There are a number of exercises at the end of each chapter which should help users become comfortable with the language.