Can Physics Save Miami (and Shanghai and Venice, by Lowering the Sea)? 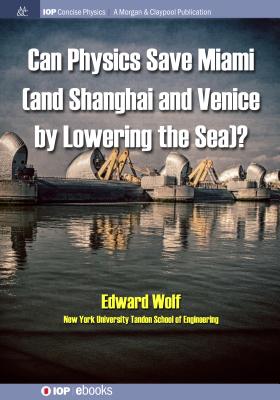 The sea is steadily rising, presently at 3.4 mm/y, already costing Billions in Venice, on the Thames River and in New York City, to counter sea-level-related surges. Experts anticipate an accelerated rise, and credible predictions for sea level rise by the year 2100 range from 12 inches to above 6 feet. Study of the Earth's geologic history, through ice-core samples, links sea level rise to temperature rise. Since the lifetime of carbon dioxide in the atmosphere is measured in centuries, and it has upset the balance of incoming and outgoing energy, the Earth's temperature will continue to rise, even if carbon burning ceases. Engineering the Earth's solar input appears increasingly attractive and practical as a means to lower Earth's temperature, and thus, to lower sea level. The cost of engineering the climate appears small, comparable, even, to the already-incurred costs of sea level rise represented by civil engineering projects in London, Venice and New York City. Feasible deployment of geoengineering, accompanied by some reduction in carbon burning, is predicted to lower the sea level by the order of one foot by 2100 AD, negating the expected rise, to provide an immense economic benefit. The accompanying lower global temperature would reduce the severity of extreme weather, and restore habitability to lethally hot parts of the world. This book is primarily conceived to aid and inform the educated citizen: aspects may also interest climate workers.