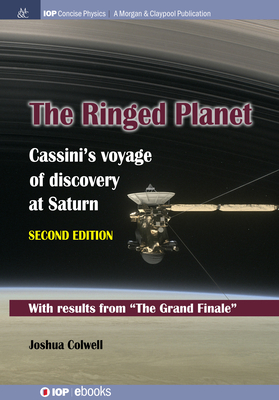 On September 15, 2017, the Cassini spacecraft sent its final transmission to the Earth as it entered the atmosphere of Saturn, ending its historic 13 year mission at the ringed planet.

This book is a beautifully illustrated journey of discovery through the Saturn system. Cassini's instruments have revealed never seen before details, including the only extraterrestrial lakes known in the solar system, and have provided unprecedented views of the rings, moons, and the planet itself. Results from Cassini's dramatic Grand Finale of ring-grazing and planet-skimming orbits are included in this expanded and updated second edition.

Saturn is the jewel of the solar system. The Cassini spacecraft has been exploring the ringed planet and its moons and rings since 2004 and has helped us solve many of its mysteries while generating a wealth of new questions. Cassini has observed the bizarre mountains of Iapetus, the geysers of Enceladus, the lakes of Titan, and the dynamic and evolving rings. Along the way, this book explores and explains the fundamental processes that shape not just the Saturn system, but planets and moons in general.

Written for the general audience with an emphasis on the fundamental physics of planetary systems, The Ringed Planet is a fascinating exploration of the Saturn system that places Saturn in the context of the solar system as a whole. Cassini's instruments have revealed Enceladus and Titan to have subsurface oceans of liquid water. Its cameras have returned stunning images of rings in turmoil, a tumbling moon, the only extraterrestrial lakes known in the solar system, a hexagon of clouds, some of the highest mountains in the solar system and much more. More than a journey of discovery at Saturn, The Ringed Planet is also an introduction to how planetary systems work.