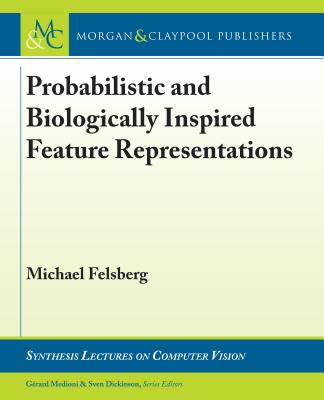 Under the title "Probabilistic and Biologically Inspired Feature Representations," this text collects a substantial amount of work on the topic of channel representations. Channel representations are a biologically motivated, wavelet-like approach to visual feature descriptors: they are local and compact, they form a computational framework, and the represented information can be reconstructed. The first property is shared with many histogram- and signature-based descriptors, the latter property with the related concept of population codes. In their unique combination of properties, channel representations become a visual Swiss army knife-they can be used for image enhancement, visual object tracking, as 2D and 3D descriptors, and for pose estimation. In the chapters of this text, the framework of channel representations will be introduced and its attributes will be elaborated, as well as further insight into its probabilistic modeling and algorithmic implementation will be given. Channel representations are a useful toolbox to represent visual information for machine learning, as they establish a generic way to compute popular descriptors such as HOG, SIFT, and SHOT. Even in an age of deep learning, they provide a good compromise between hand-designed descriptors and a-priori structureless feature spaces as seen in the layers of deep networks.