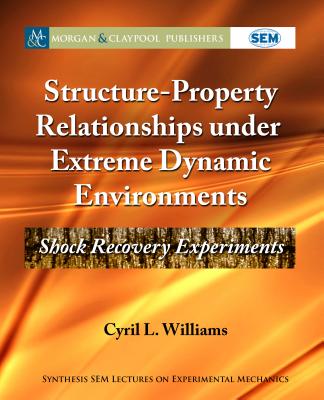 The first phase of the book, chapters 1 through 3 provides a brief historical perspective on the structure-property relationships as it pertains to shock compression science, then plastic deformation in shock compressed metals and metallic alloys is described in terms of deformation slip, deformation twinning, and their consequences to spall failure. Existing knowledge gaps and limitations on shock recovery experiments are also discussed. The fundamentals of shock wave propagation in condensed media are presented through the formation and stability of shock waves, then how they are treated using the Rankine-Hugoniot jump relations derived from the conservation of mass, momentum, and energy. The equation of states which govern the thermodynamic transition of a material from the unshock state to the shock state is briefly described and the elastic-plastic behavior of shock compressed solids is presented at the back end of the first phase of this book. The second phase of the book describes the geometry and design of shock recovery experiments using explosives, gas and powder guns. Then results derived from the residual mechanical properties, microstructure changes, and spall failure mechanisms in shock compressed metals and metallic alloys with FCC, BCC, and HCP crystal lattice structures are presented. Also, results on the residual microstructure of explosively compacted powders and powder mixtures are presented. Lastly, the book closes with the new frontiers in shock recovery experiments based on novel materials, novel microscopes, novel mechanical processing techniques, and novel time-resolved in-situ XRD shock experiments.