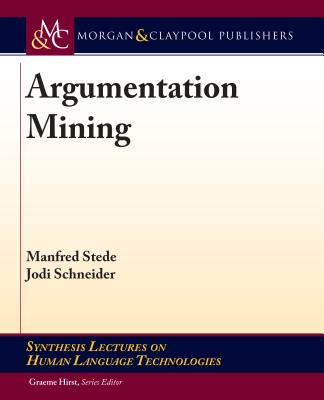 Argumentation mining is an application of natural language processing (NLP) that emerged a few years ago and has recently enjoyed considerable popularity, as demonstrated by a series of international workshops and by a rising number of publications at the major conferences and journals of the field. Its goals are to identify argumentation in text or dialogue; to construct representations of the constellation of claims, supporting and attacking moves (in different levels of detail); and to characterize the patterns of reasoning that appear to license the argumentation. Furthermore, recent work also addresses the difficult tasks of evaluating the persuasiveness and quality of arguments. Some of the linguistic genres that are being studied include legal text, student essays, political discourse and debate, newspaper editorials, scientific writing, and others.

The book starts with a discussion of the linguistic perspective, characteristics of argumentative language, and their relationship to certain other notions such as subjectivity.

Besides the connection to linguistics, argumentation has for a long time been a topic in Artificial Intelligence, where the focus is on devising adequate representations and reasoning formalisms that capture the properties of argumentative exchange. It is generally very difficult to connect the two realms of reasoning and text analysis, but we are convinced that it should be attempted in the long term, and therefore we also touch upon some fundamentals of reasoning approaches.

Then the book turns to its focus, the computational side of mining argumentation in text. We first introduce a number of annotated corpora that have been used in the research. From the NLP perspective, argumentation mining shares subtasks with research fields such as subjectivity and sentiment analysis, semantic relation extraction, and discourse parsing. Therefore, many technical approaches are being borrowed from those (and other) fields. We break argumentation mining into a series of subtasks, starting with the preparatory steps of classifying text as argumentative (or not) and segmenting it into elementary units. Then, central steps are the automatic identification of claims, and finding statements that support or oppose the claim. For certain applications, it is also of interest to compute a full structure of an argumentative constellation of statements.

Next, we discuss a few steps that try to 'dig deeper': to infer the underlying reasoning pattern for a textual argument, to reconstruct unstated premises (so-called 'enthymemes'), and to evaluate the quality of the argumentation. We also take a brief look at 'the other side' of mining, i.e., the generation or synthesis of argumentative text.

The book finishes with a summary of the argumentation mining tasks, a sketch of potential applications, and a--necessarily subjective--outlook for the field.