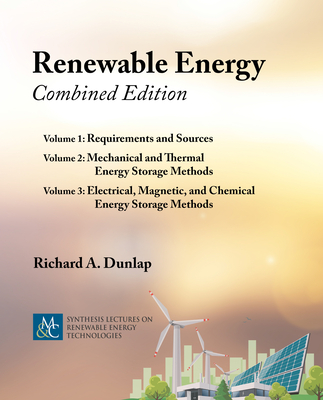 This three volume compendium begins with a review of our past dependence on fossil fuels as our primary energy source and our future needs to change how our energy is produced and utilized due to diminishing resources and environmental impact.

The first volume presents the major options for carbon-free energy including hydroelectric and solar energy for both thermal applications and the production of electricity, wind energy, and biofuels as a replacement in the transportation industry. Yet, all of these options will not work on a large scale without proper energy storage, which is the topic of the second and third volumes.

The second volume reviews the possible methods of storing energy in the form of mechanical or thermal energy. Mechanical methods include those that make use of gravitational potential energy and the storage of energy by compressing air or by storing as rotational energy in a flywheel. Sensible heat storage is discussed in terms of its applications to residential heating, community-based storage, solar ponds, and thermal storage for grid-integrated energy systems.

Richard A. Dunlap received a B.S. in Physics from Worcester Polytechnic Institute in 1974, an A.M. in Physics from Dartmouth College in 1976, and a Ph.D. in Physics from Clark University in 1981. Since receiving his Ph.D., he has been on the Faculty at Dalhousie University. He was appointed Faculty of Science Killam Research Professor in Physics from 2001-2006 and served as Director of the Dalhousie University Institute for Research in Materials from 2009-2015. He currently holds an appointment as Research Professor in the Department of Physics and Atmospheric Science. Prof. Dunlap has published more than 300 refereed research papers and his research interests have included magnetic materials, amorphous alloys, critical phenomena, hydrogen storage, quasicrystals, superconductivity, and materials for advanced batteries. Much of his work involves the application of nuclear spectroscopic techniques to the investigation of solid-state properties. He is the author of seven previous books: Experimental Physics: Modern Methods (Oxford, 1988); The Golden Ratio and Fibonacci Numbers (World Scientific, 1997); An Introduction to the Physics of Nuclei and Particles (Brooks/Cole, 2004); Sustainable Energy (Cengage, 1st ed. 2015, 2nd ed. 2019); Novel Microstructures for Solids (Morgan & Claypool, 2018; Particle Physics (Morgan & Claypool 2018); and The Mössbauer Effect (Morgan & Claypool, 2019).