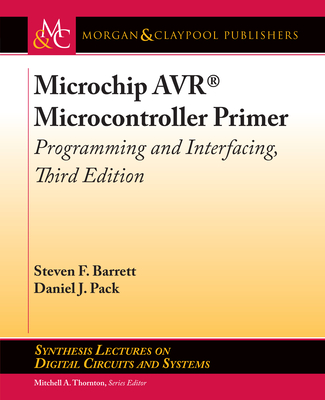 This textbook provides practicing scientists and engineers a primer on the Microchip AVR(R) microcontroller.

The revised title of this book reflects the 2016 Microchip Technology acquisition of Atmel Corporation. In this third edition we highlight the popular ATmega164 microcontroller and other pin-for-pin controllers in the family with a complement of flash memory up to 128 KB. The third edition also provides an update on Atmel Studio, programming with a USB pod, the gcc compiler, the ImageCraft JumpStart C for AVR compiler, the Two-Wire Interface (TWI), and multiple examples at both the subsystem and system level. Our approach is to provide readers with the fundamental skills to quickly set up and operate with this internationally popular microcontroller. We cover the main subsystems aboard the ATmega164, providing a short theory section followed by a description of the related microcontroller subsystem with accompanying hardware and software to operate the subsystem. In all examples, we use the C programming language. We include a detailed chapter describing how to interface the microcontroller to a wide variety of input and output devices and conclude with several system level examples including a special effects light-emitting diode cube, autonomous robots, a multi-function weather station, and a motor speed control system.