What Is Artificial Intelligence?: A Conversation Between an AI Engineer and a Humanities Researcher 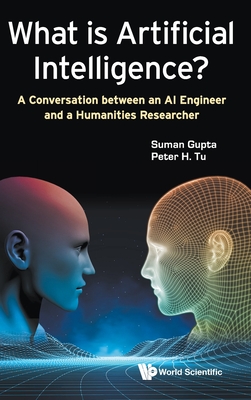 This book engages with the title question: what is artificial intelligence (AI)? Instead of reiterating received definitions or surveying the field from a disciplinary perspective, the question is engaged here by putting two standpoints into conversation. The standpoints are different in their disciplinary groundings -- i.e. technology and the humanities -- and also in their approaches -- i.e. applied and conceptual. Peter is an AI engineer: his approach is in terms of how to make AI work. Suman is a humanities researcher: his approach is in terms of what people and academics mean when they say 'AI'.A coherent argument, if not a consensus, develops by putting the two standpoints into conversation. The conversation is presented in 32 short chapters, in turn by Suman and Peter. There are two parts: Part 1, Questioning AI, and Part 2, AI and Government Policy. The first part covers issues such as the meaning of intelligence, automation, evolution, artificial and language. It outlines some of the processes through which these concepts may be technologically grounded as AI. The second part addresses policy considerations that underpin the development of AI and responds to the consequences. Themes taken up here include: rights and responsibilities; data usage and state-level strategies in the USA, UK and China; unemployment and policy futures.