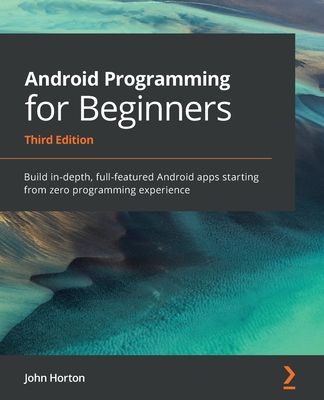 Do you want to make a career in programming but don't know where to start? Do you have a great idea for an app but don't know how to make it a reality? Or are you worried that you'll have to learn Java programming to become an Android developer? Look no further! This new and expanded third edition of Android Programming for Beginners will be your guide to creating Android applications from scratch.

The book starts by introducing you to all the fundamental concepts of programming in an Android context, from the basics of Java to working with the Android API. You'll learn with the help of examples that use up-to-date API classes and are created within Android Studio, the official Android development environment that helps supercharge your mobile application development process. After a crash course on the key programming concepts, you'll explore Android programming and get to grips with creating applications with a professional-standard UI using fragments and storing user data with SQLite. This Android Java book also shows you how you can make your apps multilingual, draw on the screen with a finger, and work with graphics, sound, and animations.

By the end of this Android programming book, you'll be ready to start building your own custom applications in Android and Java.

What You Will Learn:

Who this book is for:

This Android book is for you if you are completely new to Java, Android, or programming and want to get started with Android app development. If you have experience of using Java on Android, this book will serve as a refresher to help you advance your knowledge and make progress through the early projects covered in the book.