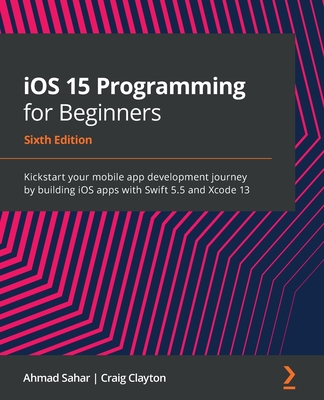 Complete with hands-on tutorials, projects, and self-assessment questions, this easy-to-follow guide will help you get well-versed with the Swift language to build your apps and introduce exciting new technologies that you can incorporate into your apps. You'll learn how to publish iOS apps and work with Mac Catalyst, SharePlay, SwiftUI, Swift concurrency, and much more.

By the end of this iOS development book, you'll have the knowledge and skills to write and publish interesting apps, and more importantly, to use the online resources available to enhance your app development journey.

This book is for anyone who has programming experience but is new to Swift and iOS app development. Basics knowledge of programming, including loops, boolean, and so on, is necessary.

Ahmad Sahar is a trainer, presenter, and consultant at Tomafuwi Productions, specializing in conducting training courses for macOS and iOS, macOS Support Essentials certification courses, and iOS Development courses. He is a member of the DevCon iOS and MyCocoaHeads online communities in Malaysia, and has conducted presentations and talks for both groups. In his spare time, he likes building and programming LEGO Mindstorms robots. Craig Clayton is a self-taught senior iOS engineer at Fan Reach, specializing in building mobile experiences for NBA, NHL, CHL, and NFL teams. He also volunteered as the organizer of the Suncoast iOS meetup group in the Tampa/St. Petersburg area for 3 years, preparing presentations and hands on talks for this group and other groups in the community. He is launching a new site called Design To SwiftUI online, which specializes in teaching developers and designers how to build iOS apps from design to SwiftUI video courses.