The React Workshop: Get started with building web applications using practical tips and examples from React use cases 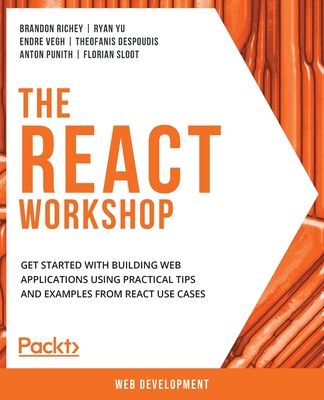 Are you interested in how React takes command of the view layer for web and mobile apps and changes the data of large web applications without needing to reload the page?

This workshop will help you learn how and show you how to develop and enhance web apps using the features of the React framework with interesting examples and exercises.

The workshop starts by demonstrating how to create your first React project. You'll tap into React's popular feature JSX to develop templates and use DOM events to make your project interactive. Next, you'll focus on the lifecycle of the React component and understand how components are created, mounted, unmounted, and destroyed. Later, you'll create and customize components to understand the data flow in React and how props and state communicate between components. You'll also use Formik to create forms in React to explore the concept of controlled and uncontrolled components and even play with React Router to navigate between React components. The chapters that follow will help you build an interesting image-search app to fetch data from the outside world and populate the data to the React app. Finally, you'll understand what ref API is and how it is used to manipulate DOM in an imperative way.

By the end of this React book, you'll have the skills you need to set up and create web apps using React.

The React Workshop is for web developers and programmers who are looking to learn React and use it for creating and enhancing web applications. Although the workshop is for beginners, prior knowledge of JavaScript programming and HTML and CSS is necessary to easily understand the concepts that are covered.

Brandon Richey is a software engineer and a React enthusiast who has written several popular React tutorials. He has been making professional and hobby programming projects spanning healthcare, personal sites, recruiting, and game development for nearly 20 years! Brandon is the author of the Packt book 'Create React App 2 Quick Start Guide'.

Ryan Yu is a senior UI engineer, writer, and speaker. He specializes in React with Redux and WebGL. His specialties and passion have led him to create a frontend course, FrontEnd 30, helping many developers and engineers improve their skills. He has led many web projects for government departments, universities, and banks. He has also contributed to developing several design systems built with React. He has also developed SEM & BIO to manage CSS in a better way.

Endre Vegh is a software engineer at Helpfulpeeps where he spends most of his time building web and mobile apps using react and react-native. Although his main focus is front-end related technologies, he is interested in creating backend solutions. He is fond of functional programming principles and figuring out the abstractions. He enjoys finding out things and sharing them. He can be obsessed with shiny new tech, currently, it is all about ReasonML.

Theofanis Despoudis is a senior software engineer and an experienced mentor. He has extensive experience with React, Redux, and Typescript. He has a keen interest in open-source architectures, cloud computing, best practices, and functional programming. He occasionally blogs on several publishing platforms and enjoys creating projects from inspiration. Theo is the author of the Packt video course 'Advanced Go Programming in 7 Days'.

Anton Punith is a technology enthusiast and a creative person who loves to build things. Working over a decade in front-end-development, he is an old school developer who believes in clean hand-coded HTML, CSS, and JavaScript. He fell in love with CSS and JavaScript when he first learned it and the romance still continues. He is an ardent learner who likes to share what he's learned.

Florian Sloot is a tech-lover since childhood and during his development years, he learned the importance of teaching and guiding. Therefore, as he got some experience with building applications, he started publishing learning resources himself. To date, he has taught hundreds of students and co-workers.