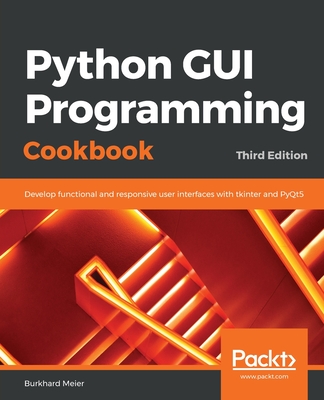 Python is a multi-domain, interpreted programming language that is easy to learn and implement. With its wide support for frameworks to develop GUIs, you can build interactive and beautiful GUI-based applications easily using Python. This third edition of Python GUI Programming Cookbook follows a task-based approach to help you create effective GUIs with the smallest amount of code. Every recipe in this book builds upon the last to create an entire, real-life GUI application. These recipes also help you solve problems that you might encounter while developing GUIs. This book mainly focuses on using Python's built-in tkinter GUI framework. You'll learn how to create GUIs in Python using simple programming styles and object-oriented programming (OOP). As you add more widgets and expand your GUI, you will learn how to connect to networks, databases, and graphical libraries that greatly enhance the functionality of your GUI. You'll also learn how to use threading to ensure that your GUI doesn't become unresponsive. Toward the end, you'll learn about the versatile PyQt GUI framework, which comes along with its own visual editor that allows you to design GUIs using drag and drop features. By the end of the book, you'll be an expert in designing Python GUIs and be able to develop a variety of GUI applications with ease.

If you're a programmer or developer looking to enhance your Python skills by writing powerful GUI applications, this book is for you. Familiarity with the Python programming language is necessary to get the most out of the book.

His previous jobs include working as a senior test automation engineer and designer for InfoGenesis (now Agilysys), QAD, InTouch Health, and FLIR Systems.

Over the past three years, he has also developed several video courses on Python for Packt, the latest course being Mastering Object-Oriented Programming with Python.