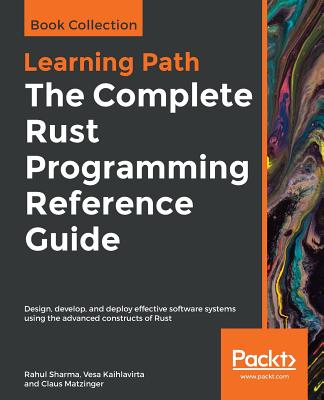 Rust is a powerful language with a rare combination of safety, speed, and zero-cost abstractions. This Learning Path is filled with clear and simple explanations of its features along with real-world examples, demonstrating how you can build robust, scalable, and reliable programs.

You’ll get started with an introduction to Rust data structures, algorithms, and essential language constructs. Next, you will understand how to store data using linked lists, arrays, stacks, and queues. You’ll also learn to implement sorting and searching algorithms, such as Brute Force algorithms, Greedy algorithms, Dynamic Programming, and Backtracking. As you progress, you’ll pick up on using Rust for systems programming, network programming, and the web. You’ll then move on to discover a variety of techniques, right from writing memory-safe code, to building idiomatic Rust libraries, and even advanced macros.

By the end of this Learning Path, you’ll be able to implement Rust for enterprise projects, writing better tests and documentation, designing for performance, and creating idiomatic Rust code.

This Learning Path includes content from the following Packt products:

Rahul Sharma is passionately curious about teaching programming. He has been writing software for the last two years. He got started with Rust with his work on Servo, a browser engine by Mozilla Research as part of his GSoC project. At present, he works at AtherEnergy, where he is building resilient cloud infrastructure for smart scooters. His interests include systems programming, distributed systems, compilers and type theory. He is also an occasional contributor to the Rust language and does mentoring of interns on the Servo project by Mozilla.

Vesa Kaihlavirta has been programming since he was five, beginning with C64 Basic. His main professional goal in life is to increase awareness of programming languages and software quality in all industries that use software. He's an Arch Linux Developer Fellow, and has been working in the telecom and financial industry for a decade. Vesa lives in Jyvaskyla, central Finland.

Claus Matzinger is a software engineer with a very diverse background. After working in a small company maintaining code for embedded devices, he joined a large corporation to work on legacy Smalltalk applications. This led to a great interest in programming languages early on, and Claus became the CTO for a health games start-up based on Scala technology. Since then, Claus' roles have shifted toward customer-facing roles in the IoT database-technology start-up crate.io and, most recently, Microsoft. There, he hosts a podcast, writes code together with customers, and blogs about the solutions arising from these engagements. For more than 5 years, Claus has implemented software to help customers innovate, achieve, and maintain success.