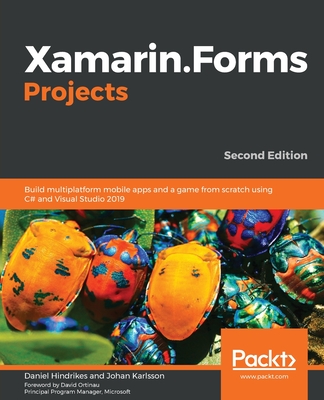 Xamarin.Forms is a lightweight cross-platform development toolkit for building apps with a rich user interface. Improved and updated to cover the latest features of Xamarin.Forms, this second edition covers CollectionView and Shell, along with interesting concepts such as augmented reality (AR) and machine learning.

Starting with an introduction to Xamarin and how it works, this book shares tips for choosing the type of development environment you should strive for when planning cross-platform mobile apps. You’ll build your first Xamarin.Forms app and learn how to use Shell to implement the app architecture. The book gradually increases the level of complexity of the projects, guiding you through creating apps ranging from a location tracker and weather map to an AR game and face recognition. As you advance, the book will take you through modern mobile development frameworks such as SQLite, .NET Core Mono, ARKit, and ARCore. You’ll be able to customize your apps for both Android and iOS platforms to achieve native-like performance and speed. The book is filled with engaging examples, so you can grasp essential concepts by writing code instead of reading through endless theory.

By the end of this book, you’ll be ready to develop your own native apps with Xamarin.Forms and its associated technologies, such as .NET Core, Visual Studio 2019, and C#.

This book is for C# and .NET developers who want to learn Xamarin.Forms and get started with native Xamarin mobile application development from the ground up. Working knowledge of Visual Studio will help you to get the most out of this book.

Daniel Hindrikes is a developer and architect with a passion for developing mobile apps powered by the cloud. Daniel fell in love with Xamarin in the early days of Xamarin when he realized that he could use C# even for iOS and Android apps, and that he could share code with the Windows apps he was also building. But Daniel started to build mobile apps long before that, working on Android apps with Java and even Java ME apps (a long, long time ago). Daniel enjoys sharing his knowledge and can be found speaking at conferences, blogging, or recording the podcast, The Code Behind. Daniel works at the company tretton37 in Sweden and has experience working with both local and global customers.

Johan Karlsson has been working with Xamarin since the days of MonoTouch and Mono for Android, and it all started with writing a game. He is a full-stack developer, currently focusing on mobile applications using Xamarin, but has in the past worked a lot with ASP.NET MVC, Visual Basic.NET (not proud), and C# in general. Also, he's created a whole bunch of databases in SQL Server over the years. Johan works at tretton37 in Sweden and has about 20 years' experience in the trade of assembling ones and zeros.