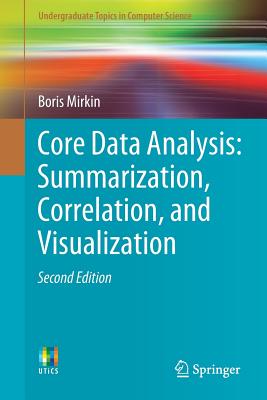 This text examines the goals of data analysis with respect to enhancing knowledge, and identifies data summarization and correlation analysis as the core issues. Data summarization, both quantitative and categorical, is treated within the encoder-decoder paradigm bringing forward a number of mathematically supported insights into the methods and relations between them. Two Chapters describe methods for categorical summarization: partitioning, divisive clustering and separate cluster finding and another explain the methods for quantitative summarization, Principal Component Analysis and PageRank.

- An in-depth presentation of K-means partitioning including a corresponding Pythagorean decomposition of the data scatter.

- Advice regarding such issues as clustering of categorical and mixed scale data, similarity and network data, interpretation aids, anomalous clusters, the number of clusters, etc.

- Thorough attention to data-driven modelling including a number of mathematically stated relations between statistical and geometrical concepts including those between goodness-of-fit criteria for decision trees and data standardization, similarity and consensus clustering, modularity clustering and uniform partitioning.

- Restructured to make the logics more straightforward and sections self-contained

Core Data Analysis: Summarization, Correlation and Visualization is aimed at those who are eager to participate in developing the field as well as appealing to novices and practitioners.

Boris Mirkin holds a PhD in Computer Science (Mathematics) and DSc in Systems Analysis (Technology) degrees from Russian Universities. Between 1991-2010, he had long-term visiting appointments in France, Germany, USA, and a teaching appointment as a Professor of Computer Science at Birkbeck University of London, UK (2000-2010).

He develops methods for clustering and interpretation of complex data within the "data recovery" perspective. Currently these approaches are being extended to automation of text analysis problems including the development and use of hierarchical ontologies. He has published a hundred refereed papers and a dozen books, of which the latest are: "Clustering: A Data Recovery Approach" (Chapman and Hall/CRC Press, 2012) and a textbook "Introductory Data Analysis" (In Russian, URAIT Publishers, Moscow, 2016).