Modeling and Simulation with Compose and Activate 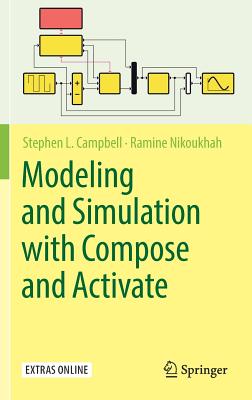 This book provides a tutorial in the use of Altair Compose and Altair Activate, software packages that provide system modeling and simulation facilities. Advanced system modeling software provide multiple ways of creating models: models can be programmed in specialized languages, graphically constructed as block-diagrams and state machines, or expressed mathematically in equation-based languages. Compose and Activate are introduced in this text in two parts. The first part introduces the multi-language environment of Compose and its use for modeling, simulation and optimization. The second describes the graphical system modeling and optimization with Activate, an open-system environment providing signal-based modeling as well as physical system component-based modeling. Throughout both parts are applied examples from mechanical, biological, and electrical systems, as well as control and signal processing systems. This book will be an invaluable addition with many examples both for those just interested in OML and those doing industrial scale modeling, simulation, and design. All examples are worked using the free basic editions of Activate and Compose that are available.

Stephen L Campbell is a Distinguished Professor of Mathematics at North Carolina State University, a fellow of the IEEE, a fellow of the Society for Industrial and Applied Mathematics, and has published extensively on numerical methods and control. He received a PhD in Mathematics from Northwestern University.
Ramine Nikoukhah is Vice President for System Modeling and Simulation at Altair Engineering. He also teaches at the engineering school ESILV where he uses Activate in systems, control and mechatronics courses. Previously he had been director of research at INRIA, where he was a member of the team that developed Scilab and Scicos. He has received a PhD in Electrical Engineering and Computer Science from MIT.