Challenging the Borders of Justice in the Age of Migrations 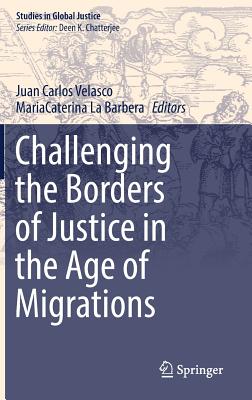 The volume gathers theoretical contributions on human rights and global justice in the context of international migration. It addresses the need to reconsider human rights and the theories of justice in connection with the transformation of the social frames of reference that international migrations foster. The main goal of this collective volume is to analyze and propose principles of justice that serve to address two main challenges connected to international migrations that are analytically differentiable although inextricably linked in normative terms: to better distribute the finite resources of the planet among all its inhabitants; and to ensure the recognition of human rights in current migration policies. Due to the very nature of the debate on global justice and the implementation of human rights and migration policies, this interdisciplinary volume aims at transcending the academic sphere and appeals to a large public through argumentative reflections. Challenging the Borders of Justice in the Age of Migrations represents a fresh and timely contribution.

In a time when national interests are structurally overvalued and borders increasingly strengthened, it's a breath of fresh air to read a book in which migration flows are not changed into a threat. We simply cannot understand the world around us through the lens of the 'migration crisis'-a message the authors of this book have perfectly understood. Aimed at a strong link between theories of global justice and policies of border control, this timely book combines the normative and empirical to deeply question the way our territorial boundaries are justified.

This book is essential reading for those frustrated by the limitations of the dominant ways of thinking about global justice especially in relation to migration. By bringing together discussions of global justice, cosmopolitan political theory and migration, this collection of essays has the potential to transform the way in which we think and debate the critical issues of membership and movement. Together they present a critical interdisciplinary approach to international migration, human rights and global justice, challenging disciplinary borders as well as political ones.

Professor Phil Cole, University of the West of England, UK

Juan Carlos Velasco is Senior Tenured Research Scientist at the Institute of Philosophy of the Spanish National Research Council (CSIC). He is PhD in Philosophy from the Autónoma University of Madrid. He has obtained a Research Fellowship of the Humboldt Foundation, at the University of Tübingen, Germany. His main research areas are philosophy of law, ethics, and politics, with a special focus on migration, justice, human rights, and democracy. Among his numerous publications are: La teoría discursiva del derecho (CEPC 2000), Habermas. El uso público de la razón (Alianza 2013); El azar de las fronteras (FCE 2016); and, as co-editor, Global Challenges to Liberal Democracy. Political Participation, Minorities and Migrations (Springer 2013). He has been scientist in charge of the group "Right to migration" of the European Research Training Network "Applied Global Justice" (5th Framework Programme for Research). He has directed projects such as "Migration Policies, Justice and Citizenship" and "Integration, Participation and Social Justice: Regulatory Axes of Migration Policies", and currently is the Principal Investigator of "Human Rights and Global Justice in the context of International Migrations" financed by the Spanish R&D government funds.

MariaCaterina La Barbera is PhD in Human Rights from the University of Palermo, Italy. She currently is Associate Professor at the Faculty of Social Sciences of Nebrija University, Madrid (Spain). She previously worked at the Center for Political and Constitutional Studies of Madrid, the University Carlos III of Madrid, the Center for Human and Social Sciences of the Spanish National Research Council (CSIC), the University of California- Berkeley, and the University of Palermo. Her field of research lies in between Law, Politics & Society, Feminist Critical Legal and Political Theories, and International Migration Studies. In particular, her research covers: the concept of gender; the division between public and private in political theory; the complex social locationalities of women within the multiple systems of subordination in postcolonial and globalized societies; intersectionality and structural injustice; the notion of identity and its transformation in the migration processes; cultural and religious diversity in multiethnic societies; citizenship and human rights; female body modifications and controlling processes. She has been Principal Investigator of the R&D project "Women 'in Transit' and the Transformation of Gender Identity in the Migratory Processes: An Interdisciplinary Approach", funded by the Spanish Women's Institute and the European Social Fund. She published several journal articles and book chapters. She also authored a book monograph entitled Multicentered Feminism (Compostampa 2009), and edited the volumes Identity and Migration: An Interdisciplinary Perspective (Springer 2015) and Igualdad de género y no discriminación en España: evolución, problemas y perspectivas (CEPC 2016).