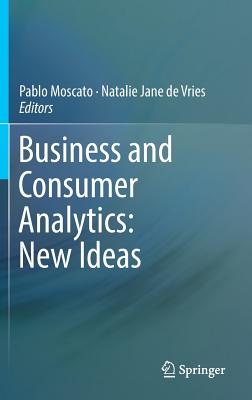 This two-volume handbook presents a collection of novel methodologies with applications and illustrative examples in the areas of data-driven computational social sciences. Throughout this handbook, the focus is kept specifically on business and consumer-oriented applications with interesting sections ranging from clustering and network analysis, meta-analytics, memetic algorithms, machine learning, recommender systems methodologies, parallel pattern mining and data mining to specific applications in market segmentation, travel, fashion or entertainment analytics. A must-read for anyone in data-analytics, marketing, behavior modelling and computational social science, interested in the latest applications of new computer science methodologies.

The chapters are contributed by leading experts in the associated fields.The chapters cover technical aspects at different levels, some of which are introductory and could be used for teaching. Some chapters aim at building a common understanding of the methodologies and recent application areas including the introduction of new theoretical results in the complexity of core problems. Business and marketing professionals may use the book to familiarize themselves with some important foundations of data science. The work is a good starting point to establish an open dialogue of communication between professionals and researchers from different fields.

Together, the two volumes present a number of different new directions in Business and Customer Analytics with an emphasis in personalization of services, the development of new mathematical models and new algorithms, heuristics and metaheuristics applied to the challenging problems in the field. Sections of the book have introductory material to more specific and advanced themes in some of the chapters, allowing the volumes to be used as an advanced textbook. Clustering, Proximity Graphs, Pattern Mining, Frequent Itemset Mining, Feature Engineering, Network and Community Detection, Network-based Recommending Systems and Visualization, are some of the topics in the first volume. Techniques on Memetic Algorithms and their applications to Business Analytics and Data Science are surveyed in the second volume; applications in Team Orienteering, Competitive Facility-location, and Visualization of Products and Consumers are also discussed. The second volume also includes an introduction to Meta-Analytics, and to the application areas of Fashion and Travel Analytics. Overall, the two-volume set helps to describe some fundamentals, acts as a bridge between different disciplines, and presents important results in a rapidly moving field combining powerful optimization techniques allied to new mathematical models critical for personalization of services.

He obtained his Bachelor of Science degree from the University of La Plata in Argentina before completing a PhD at the University of Campinas in Brazil. During a postdoctoral position at the California Institute of Technology, he developed a new methodology called 'memetic algorithms' which is now widely used around the world.

Pablo Moscato has made several key advances in personalised medicine over the past 27 years of his career including identifying important biomarkers and hallmarks of cancer and epilepsy. He has also identified gene expression maps for multiple sclerosis and developed algorithms for successfully discovering biomarkers for Alzheimer's disease with high accuracy for predicting the onset of the disease, which was previously thought to be a disease somewhat precarious to predict.Pablor Moscato has won several prestigious awards including the best paper award at the First European Workshop in Evolutionary Computation and Bioinformatics and has also been an invited keynote speaker at numerous scientific conferences including the Metaheuristics International Conference in Singapore and the Congress of the Chilean Institute of Operations Research in 2011. He has successfully supervised more than 13 PhD candidates to completion and is currently supervising another 12 candidates enrolled at the University of Newcastle. Pablo Moscato has also gained more than $11 million in project grant funding over the past 15 years.

Natalie de Vries is a Conjoint Research Fellow of the University of Newcastle, Australia and a Business Consultant for Atos; a French multinational IT service and consulting company. She holds a B.Com in Economics, a B.Bus in International Business and Marketing and a first-class Honours thesis in Marketing at the University of Newcastle. She has worked at the University's Priority Research Centre for Bioinformatics, Biomarker Discovery and Information-Based medicine (CIBM), which was later re-branded as the group of Life and Economy Applications of Data Science (LEADS). Here she conducted interdisciplinary research with computer scientists in the field of computational social science and she was in charge of the centre's outgoing communications to the general and online community and engaged with private donors of the centre.