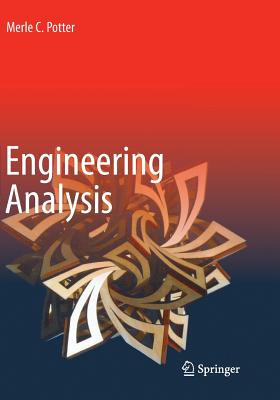 The purpose of this book is to introduce undergraduate students of engineering and the physical sciences to applied mathematics often essential to the successful solutions of practical problems. The topics selected are a review of Differential Equations, Laplace Transforms, Matrices and Determinants, Vector Analysis, Partial Differential Equations, Complex Variables, and Numerical Methods. The style of presentation is such that the step-by-step derivations may be followed by the reader with minimum assistance. Liberal use of approximately 160 examples and 1000 homework problems serves to aid students in their study. This book presents mathematical topics using derivations (similar to the technique used in engineering textbooks) rather than theorems and proofs typically found in textbooks written by mathematicians. Engineering Analysis is uniquely qualified to help apply mathematics to physical applications (spring-mass systems, electrical circuits, conduction, diffusion, etc.), in a manner as efficient and understandable as possible.
This book was written to provide for an additional mathematics course after differential equations, to permit several topics to be introduced in one semester, and to make the material comprehensible to undergraduates.The book comes with an Instructor Solutions Manual, available on request, that provides solutions to all problems and also a Student Solutions Manual that provides solutions to select problems (the answers to which are given at the back of the book).

Merle C. Potter graduated with honors from MTU in 1958 with a B.S. degree in Mechanical Engineering and continued his education in Engineering Mechanics earning an M.S. degree from MTU in 1961. He continued his graduate education at the University of Michigan and earned a second M.S. degree in Aerospace Engineering in 1964 and a Ph.D. in Engineering Mechanics in 1965. Merle began his teaching career at Michigan Tech as an Instructor in 1958. While pursuing his graduate degrees from the University of Michigan he held the positions of Teaching Fellow and Instructor. Merle began an over thirty year career with Michigan State University in 1965 as an Assistant Professor. He was promoted to Associate Professor in 1969 and became a full Professor in 1971. Merle retired and was given the title of Professor Emeritus in 1994 and assisted the university as a Visiting Professor until 1998. For over forty years Merle has had a significant influence on the engineering profession both as a professor and an author. He has written and co- authored many books on Fluid Mechanics, Mathematical Methods, Thermodynamics, Differential Equations and Review Guides for the GRE, GMAT, Fundamentals of Engineering and Professional Engineering exams. Merle has published nearly twenty archived journal papers, was the advisor for fourteen Ph.D. students and was the recipient of several. NSF grants to support his research efforts. Merle was a member of Tau Beta Pi and ASME while a student at MTU. He has also participated in Phi Eta Sigma, Phi Kappa Phi, Pi Tau Sigma, Sigma Xi, ASEE, AAM and was an active member of many major MSU committees. Merle has been honored with the Ford Faculty Scholarship in l961, the Teacher Scholar Award in 1969, and the ASME Centennial Award in 1980.